For more than 50 years, Albert Leclerc has been building the foundations of a design open to the world, going back and forth between Montreal and Milan.

His singular creativity and aesthetics have contributed immensely to the world of design, both in Italy and in Québec.
His prolific work is undefinable.

It ranges from architecture to product design, notably for Olivetti, where, for some thirty years, he designed exhibit systems and also for many Québécois firms such as Visu and Novella. Above all, and still today in the most assiduous of manners, he devotes himself to exploring matter and form and designs striking collections of objects.

A brilliant strategist, a visionary leader, he made a remarkable contribution to the development of the University of Montreal’s School of Industrial Design to which he was Dean from 1992 to 2004. He managed to consolidate design and research programs in design thereby contributing the professionalization of the discipline and the internationalization of Québécois design.

In 2012, on the occasion of the Biennale Orizzonte Quebec promoted by the Delegation of Quebec in Italy in collaboration with the Ministry of Culture and Communications of Quebec, SODEC and the Council of arts and letters of Quebec, took place in Milan the exhibition Tre generazioni, tre designer del Quebec a Milano, bringing together the work of Albert Leclerc, Ginette Caron and Nicolas Bellavance-Lecompte, three designers from Quebec who have been able to develop, at different times, an activity professional in Italy, and in Milan in particular. 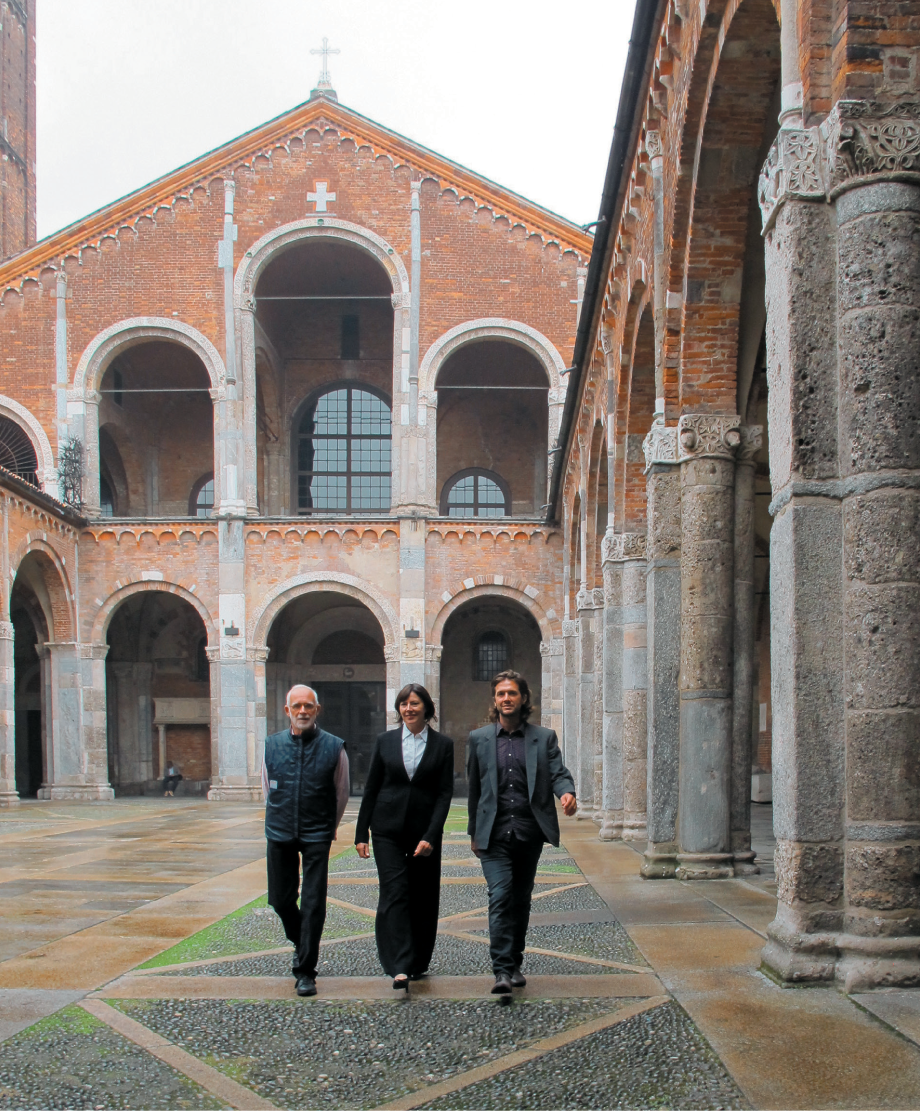 For all these reasons and more, he was granted the GRANDS PRIX DU DESIGN Tribute Award in YEAR. 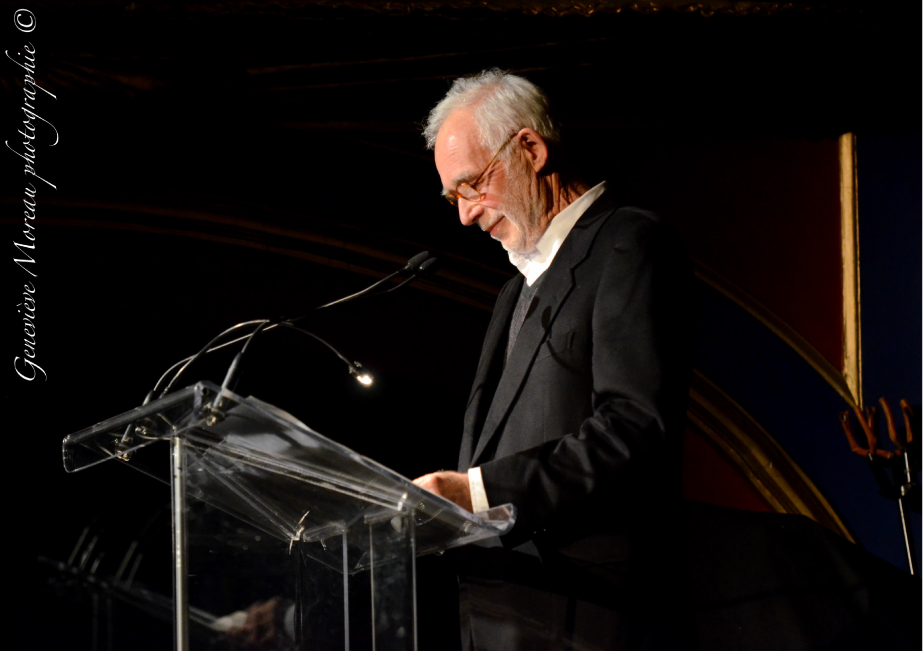 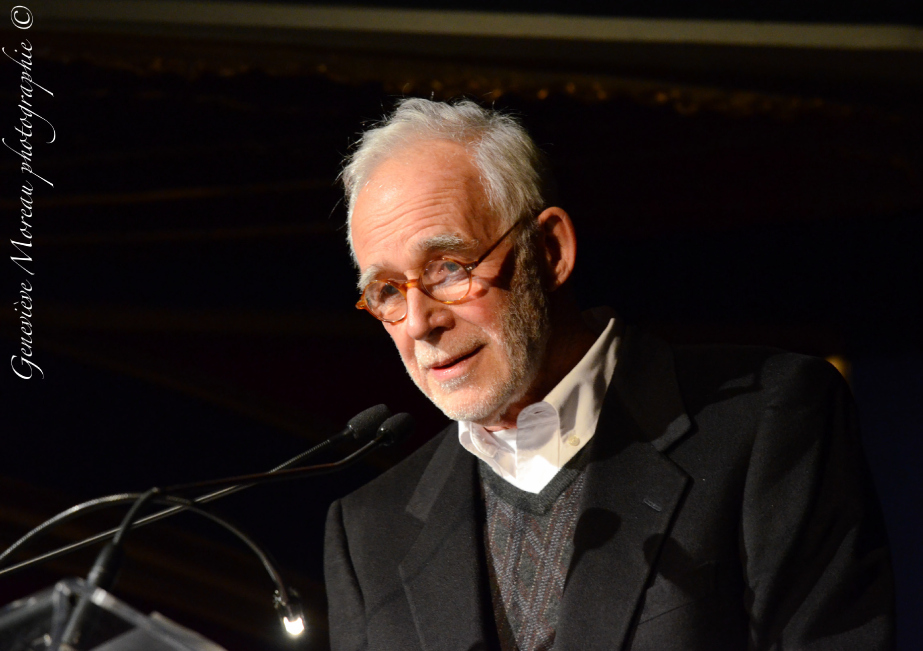 Playback on his path…

BORN TO DESIGN
With the most expressively communicating eyes and gaze, Albert explains: “My first memories of design bring me back to my toddler years. At 4, I was already inventing hairstyles for my mother Albertine. Recalling the memory brings me back to her scent and her laughter.”

TESTING 1, 2, 3…
“ Then, around seven or eight years old, I started building little wooden birdhouses and testing the effect of various shapes and colors on them. I spent hours watching if the birds preferred to enter this one rather than the other… I even dared to experiment with a cabin in the shape of a pirate’s head. I waited, waited so long, and finally the birds entered through the eye and mouth openings. They weren’t afraid! ”

THEN CAME HIGH HEELS!
His father, Philippe Leclerc, was the president of a company called Laprairie Wood Heels.Quiz question: Where do you think Teen Alby spent his Saturdays?

He wasn’t at the rink playing hockey… Nope! Instead, he’d choose to do quality control on his father’s production line. With a benevolent eye on the heels, he’d assess the varnish application, stroking the shoes to reveal the slightest of flaws.

And he LOVED it! The love of the well-made object was born… 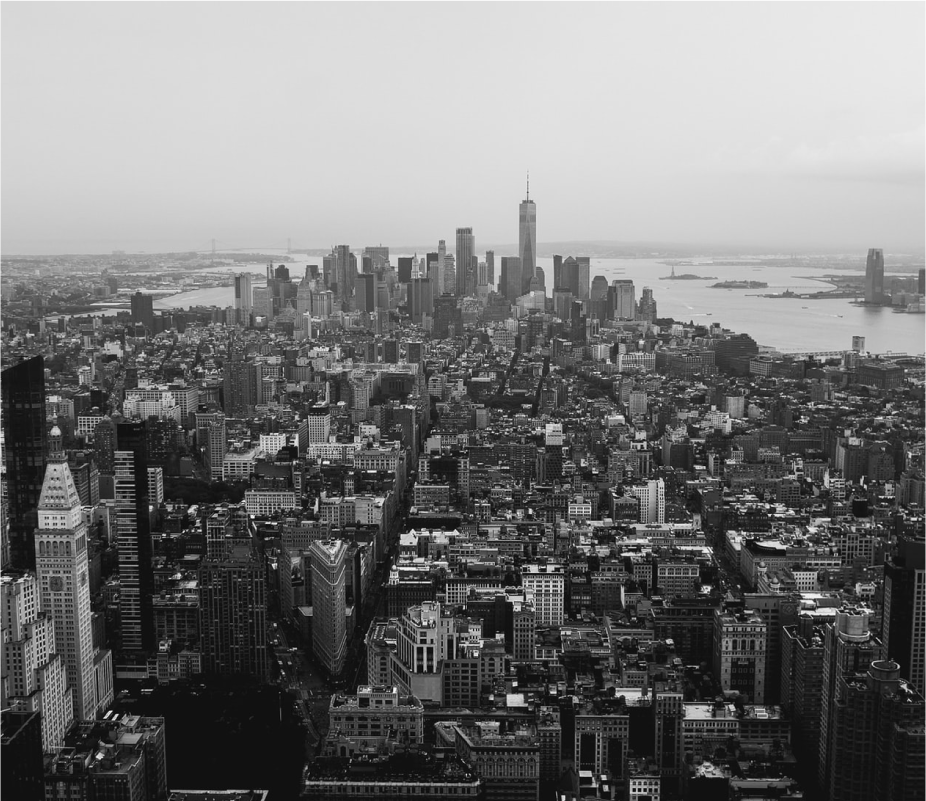 NEW YORK, NEW YORK!
At twenty years old, Albert’s stars aligned in none other than NYC!

Every two weeks a curious Leclerc would make his way to the Big Apple, walk up and down Fifth Avenue and tadam … discovering … tadam … the oh-so-beautiful Olivetti boutique, which he made home to his stays, for hours at a time and get lost in the happiness of discovery and beauty.

It was a pure revelation… the path towards design was more than set.

IN ALI’S BABA CAVE
Who knows him knows… Albert Leclerc lives both in Italy and in Québec.

Wherever he is, he likes the top floors and attic apartments pierced like Gruyère cheeses, letting in the light.

So it goes on the Plateau, atop an outdoor spiral staircase. Up, up, up … turn, turn, turn… Siamo arrivati! The bright apartment is filled to the brim with objects of all sorts and origins … like all of his places of residence, he says.
In the main room alone, there are about 20 different and distinctive chairs. Among these: a yellow Panton Chair by Verner Panton, two Hat Tricks by Frank Gehry, a Chair One by Konstantin Grcic, a Tonietta by Enzo Mari and a rocking chair made of banana fibres designed by Maria Vinka for IKEA
.

There is no doubt in our mind… here and now resides a design lover!

EVEN A CHAIR FOR SANTA…
Amongst these design icons, are also four traditional Mexican armchairs and a typical Quebecois XL rocking chair that Santa Claus would proudly take up as his throne!

THE LIT’ STORY OF THE BIG CHAIR
The legend goes as follows.

Flashback to the 1950s, before leaving Québec for graduate studies at the Royal College of Art in London, Leclerc acquired the XL chair signed by Jean-Louis Houle, a Québécois cabinetmaker, and stored it where it remained wrapped there for 40 years before his return to Montréal.

Worth noting … we also counted dozens, I mean hundreds, of stacked ceramic dishes and objects and woven baskets hanging here and there all over the place…

WHAT GIVES?¿ QUÉ PASA? CHE COSA C’É?
What explanation is there for this eclectic marriage combining design’s finest, and, what seems at first glance, as an amalgam of knickknacks?

“It’ll make one heck of a garage sale someday!”, joked Anne, only to be shut down by a: “Heck, no! Each of these pieces is signed and will make its way to a private collection or a museum someday!”

What a foolish misstep, Ms. Interviewer!

MASTERCLASS: TOUCHING IS SEEING…
In his discourse, the words “craft” and “craftmanship” come up often.

Surprising since in our popular language, these words seem to have lost their noble meanings. Albert Leclerc to the rescue … to explain his absolute respect for crafts and artisans.

“The miracle of design happens through the designers who design the objects, just as much as by the artisans who provide the technical input the designers do not hold. I have enormous respect for these anonymous allies of ours. ”

A long-term respect, accentuated in Italy, where artisans and craftsmen are certainly better regarded than in North America. “I need to touch things to see,” he adds, “I learned this way back when I was a child and have lived by it ever since…”.

RUBBING SHOULDERS WITH MASTERS
Our renowned designer has certainly learned from the best. He studied industrial prefabrication under Jean Prouvé (!), interned at Gio Ponti’s studio (!!) and was a life-long collaborator of Ettore Sottsass for Olivetti (!!!). No other designer from Québec, or even Canada, can dare say they’ve done more!

Head of exhibition design for Olivetti, he who once spent his weekends in New York admiring the products of the office equipment field leader, created pieced seen today as typical of their era, including a memo holder, a pencil holder and a paper clip holder made of synthetic rubber, exhibiting curvilinear shapes and very conspicuous colors. THE MYTHICAL VALENTINE
Designed and drawn by Sottsass in 1969, the portable Valentine (Red Valentine) typewriter has benefited from a few strokes of Leclerc’s pencil! EXQUISITE THINGS
Among the many objects signed Leclerc and sought after by collectors, drumroll for:

• the wall clocks designed for Ballardini (originally Lorenz) which made a splash in Japan (and who would do it again here and not just there!), 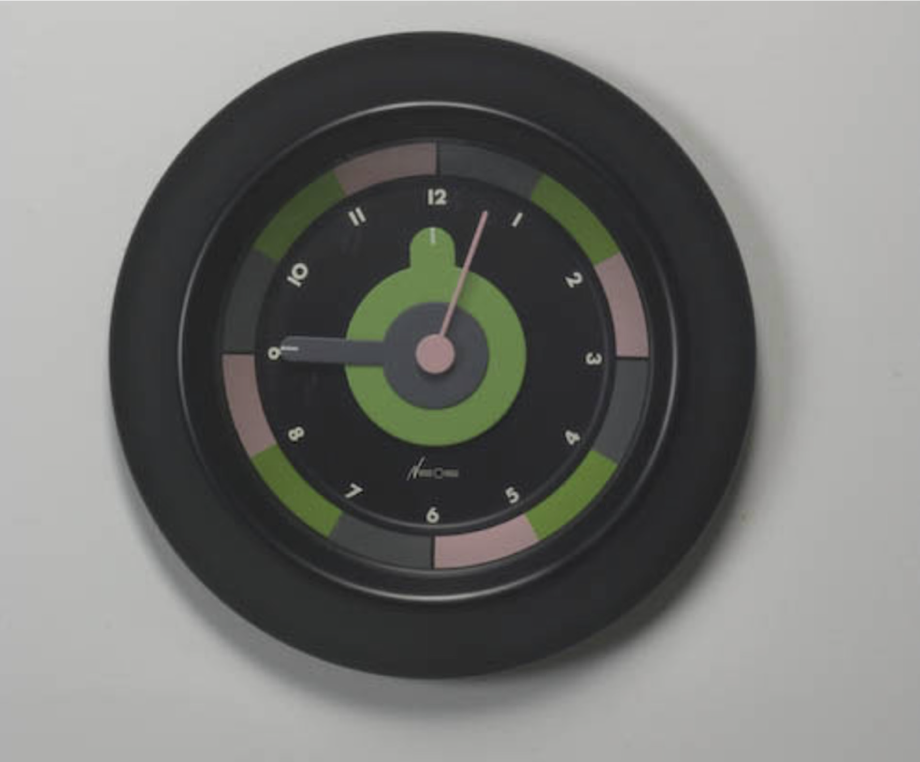 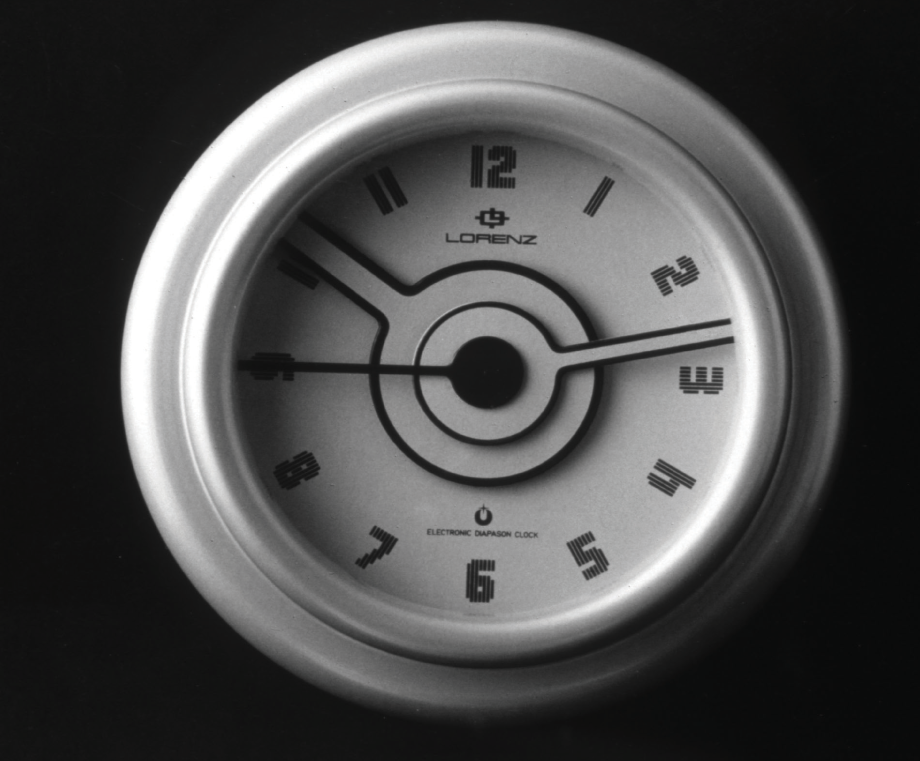 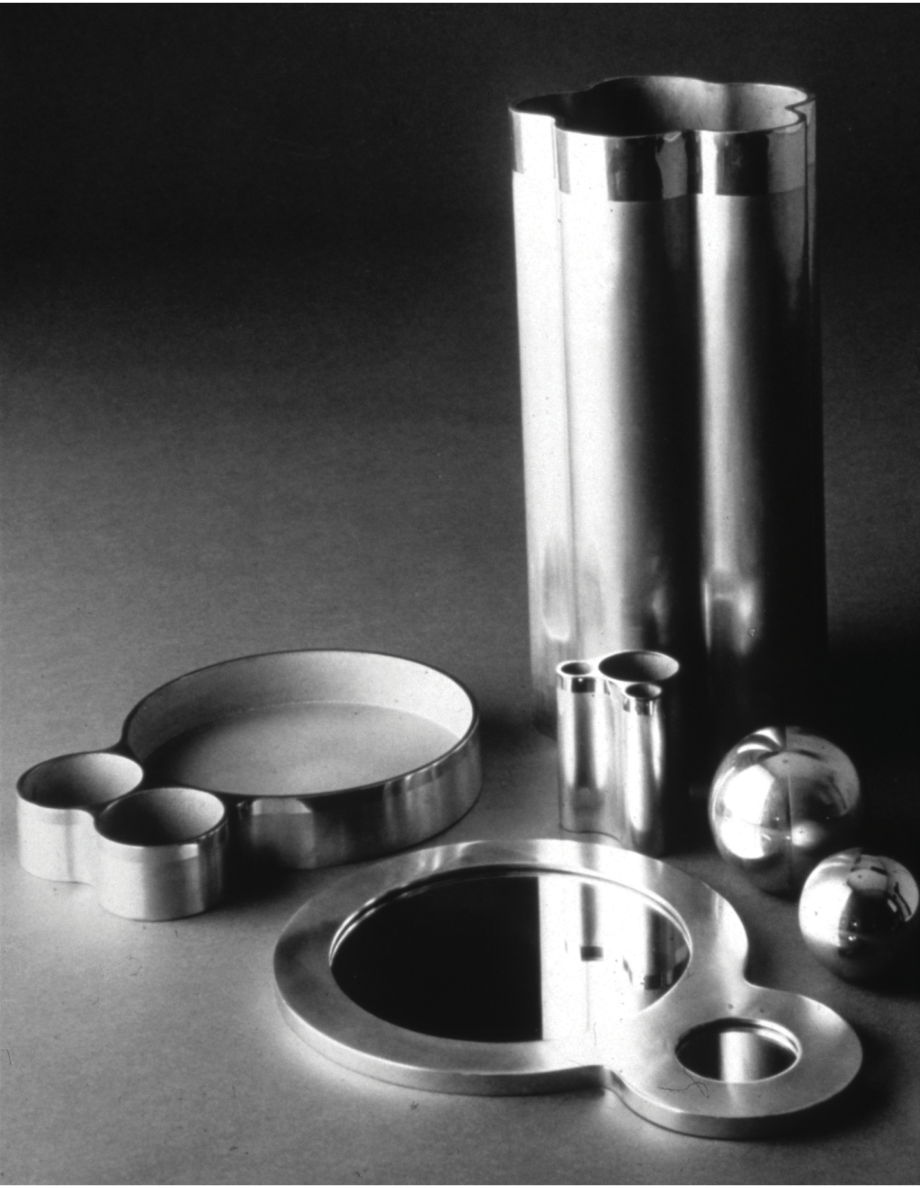 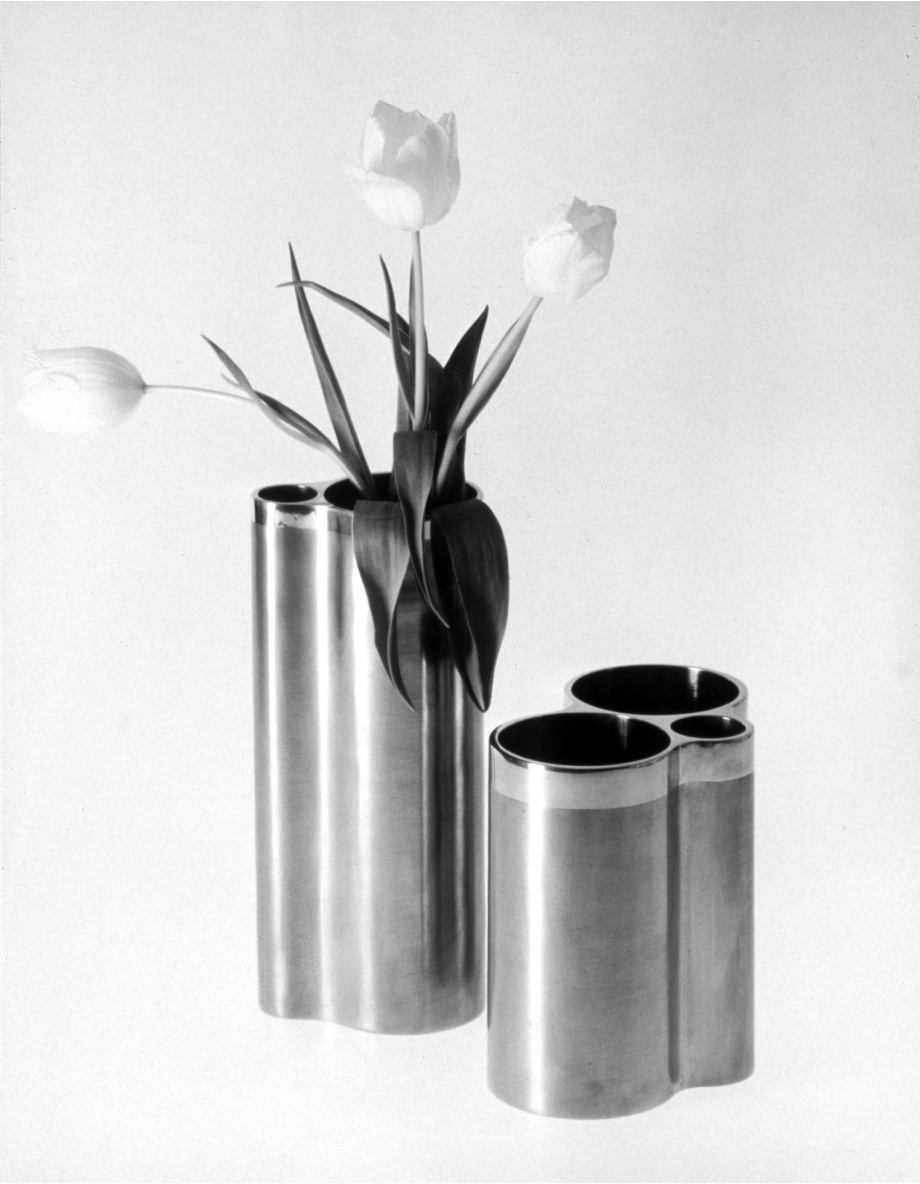 • Le Palle, a collection of objects for the home composed of twenty pieces of ceramics (plates, vases…) formed of balls. Designed forty years ago, the Le Palle collection was produced again in 2012 for an exhibition held in Milan where our designer is still considered, “Il più Italiano des Québécois”… 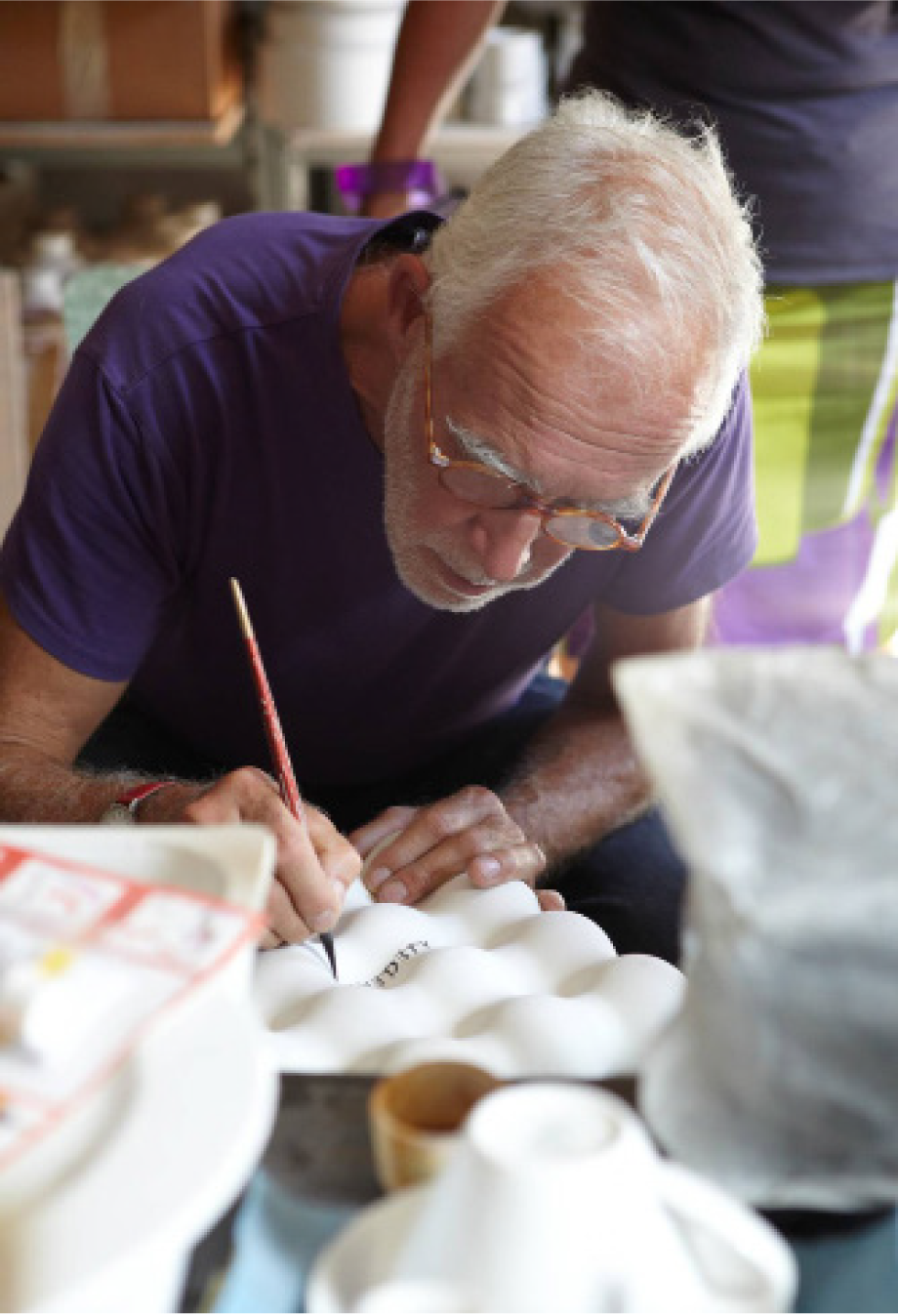 ÉCOLE DE DESIGN INDUSTRIEL RENAISSANCE
His undeniably strong past experiences in design, architecture and management made him the perfect candidate for Dean of the School of Industrial Design at the University of Montreal, in 1992. His mandate was to restore the image of ’a department that had been recognized for the quality of its program.
Respected and loved by all, he got the boat going again with flying colors, full steam ahead.

INTERNATIONAL OPENNESS AND NETWORKING WITH PRIVATE INDUSTRY
A true pioneer, Albert quickly set up various programs to promote and promote the School in Québec and abroad. At the same time, his interest in research and development remained at the heart of his applied research activity, teaming up, among others, with Hydro-Québec.

A GODFATHER TO THE DESIGN FAMIGLIA
At the initiative of Albert Leclerc, the School of Industrial Design has been enriched since 1994 with a collection of unique objects made up of donations from designers recognized around the world such as Massimo Banzi, Achille Castiglioni, Michel Dallaire, Albert Leclerc, Michel Swift, Alessandro Mendini and Ettore Sottsass.
Leclerc is a pioneer and a wise man. “I want us to leave a trace in Québec,” he said.

ALBERT FOUR SEASONS
He wears Lennon-style round tortoiseshell glasses and a ubiquitous and contagious smile.

He has a Québécois heart and an Italian soul.

He eats spaghetti, loves the transverse flute, enjoys stroking objects as we’ve already established, melts in front of the marble, holds three watches lined up on the entry counter, each hoping to be worn by the designer and chosen for his next outing, as well as a choice of wallets to compliment the jacket of the day, 5 scrumptious pears laid out next to a mountain of fresh tomatoes … oh yes, and hidden somewhere, a few bottles of Dolcetto d’Alba Sorano di Treiso from Piedmont, with their deep ruby color, their powerful nose releasing aromas of morello cherry, lavender and green pepper.

It is said. It is true. There’s nothing else to add… Il più Italiano des Québécois!

Read about too: ETTORE SOTTSASS