HAPPINESS SCALE
In 2008, Dallaire was said to measure his happiness by the number of people seated on the park benches and under the urban lighting he designed for Montreal’s Quartier international. BORN IND…
Chaos, red wine and turpentine! In Paris, at the heart of the Second World War. Dad was the great Québec painter Jean Dallaire.

Mother was his muse … a terribly beautiful, elegant and super demanding Franco-Ontarian who wore large hats and went by the name of Marie-Thérèse Ayotte.

MICHEL AT BOARDING SCHOOL
His childhood is self-described as a sad one as a full-time boarder. Michel in Normandy: 3 years. Michel in Ottawa with Mamie: 2 years. Michel at the Manoir Charles-de-Foucault in Québec City: 5 years. His earlier life history is punctuated by youthful rebellions, dustbin fires and strap-inflicted punishments. And yet, today he resembles a magician illuminated by a smile savouring the joy of life!

THUNDERBOLT, FIREWORKS AND FANFARE
At 16, Michel learns that Jean Dallaire is his adoptive father. His biological father rather comes from a large family of industrial watchmakers in France. Thunderbolt. Fireworks. Fanfare. With this revelation, comes a gift. For Michel, and forever, the pleasure comes from Xth-decimal pre-cision.

BACK IN TOWN
When the bohemian family returns to Québec City, it owns zilch! The apartment, located at 38, chemin Saint-Louis, is on the half-basement level. It’s home to 4 red and white aluminum chairs and a card table. World leaders and big shots line up to have their portraits painted by the great-ly talented artist dad.

A FAIRY GODMOTHER
Or aunt Thérèse. The gifted aunt hold the magic wand. She dragged him to museums and initiat-ed him to music. For his 13th birthday, she offered to purchase the album of his liking. He chose Little Richard. She added Glenn Gould’s Variations Goldberg. He would obsessively listen to it over and over. From then on, music became his muse.

U-TURN
Michel wants to become an architect. Jean sees it differently. A classic course would involve too much influence from priests! Scientific training imposed. Michel u-turned and attended the Institute of Applied Arts of Montréal—what a school! Then came a fifth year at Konstfackskolan, the Stockholm College of Industrial Arts in 1964–1965. An annunciation… The rigor of thought, the hidden geometry and, above all, the feel of nordicity thrilled him. There he found great affini-ties. THE DESIGNER, THE IDEA IN ITSELF IS AN APPROACH!
Michel Dallaire has never worked anonymously. It’s his rebellious bum side. Everything is signed!The 1976 Montreal Olympics flame torch, him.

Quite a fascinating story surrounds the creation of this Olympic torch. Hear Michel tell it to you in his own words!

Plasticase, the plastic briefcase launched at MOMA in 1985, him too. Over 10 million copies sold in 2008 and counting.

A huge success. A 1980s icon.
A perfect quality/product ratio.
“The simplest product I ever designed in all my life.” 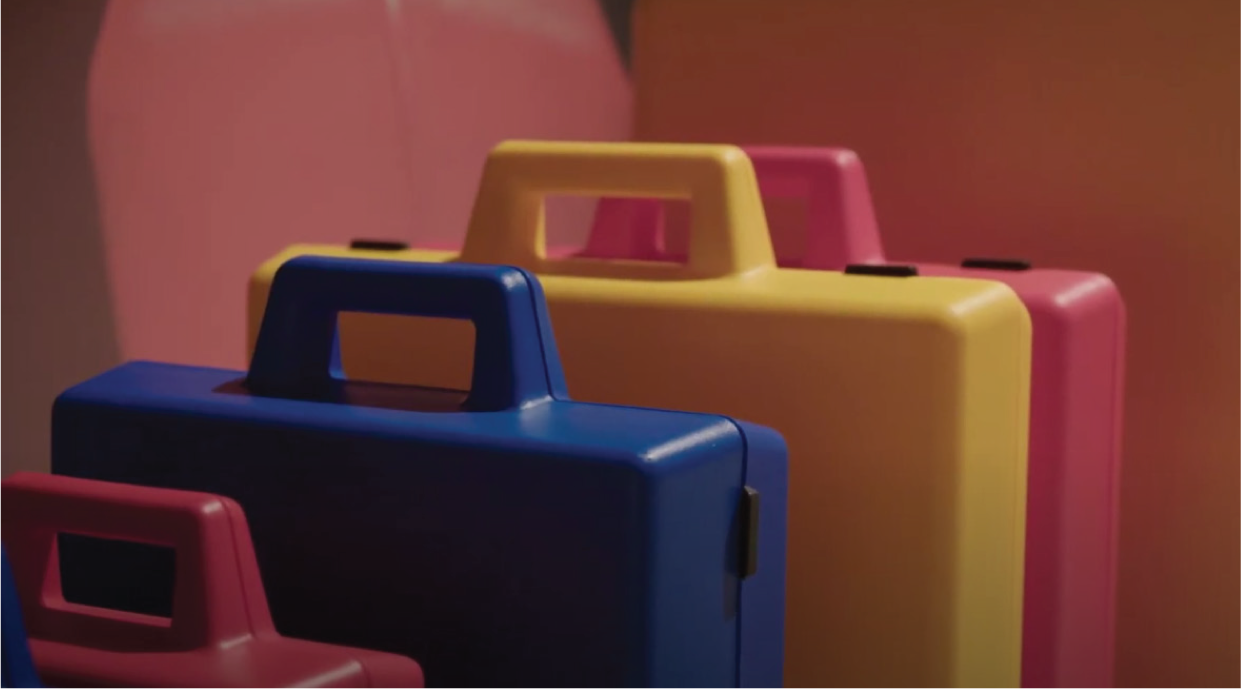 The Angelcare baby monitor designed at the turn of the 2000s, Dallaire. The Bixi bike … you’ve guessed it: Dallaire. It won the bronze at the International Design Excel-lence Award 2009, the Gold Edison Award 2009 and was selected by Time Magazine as the 19th of 50 2008 best inventions. Commissioned by the city of Montreal, the Bixi bike has been purchased by London, Boston, Minneapolis, Washington, Melbourne, New York, Toronto, Otta-wa… “If I remember correctly, 28 cities now own Bixi bikes.”, explains Dallaire in 2018 while commenting the Dallaire—de l’idée à l’objet exhibit.

ELEMENTARY, MY DEAR WATSON­!
If it’s seductive, useful and timeless, chances are Michel designed it! His thrill arises in the thor-oughness of detail and aesthetic pleasure. From the potential of the machine tool, to countless technical possibilities, the idea is always to do things differently!

PAUL-ÉMILE BORDUAS
Summum de sa consécration : 1991.
All hail, Dallaire. 1991. Dallaire received The Paul-Émile Borduas Award given by the Quebec Gouvernment, the highest distinction awarded to a person for his contributions to the world of visual arts and artistry.

BRANDING
His visual signature: geometric consistency, one of the essential components of beauty. His auditory signature: Vespers for the Blessed Virgin by Claudio Monteverdi (1567–1643).
And this gentleman considers himself a bit rough around the edges and sometimes lacking var-nish…. !!? Part of him cherishes his little peasant side, acquired in his early childhood on a farm in Normandy.

SUDDENLY, AN ANGEL
And the angel appeared … after the second bottle of wine at l’Express, decidedly the sacred headquarters for many Montreal designers and talents, since 1980, minus the pandemic-ridden latest months. Flashback to the turn of the century… “The design for Angelcare, the concept of a baby monitor, came to me while discussing the project with the brilliant entrepreneur Maurice Pinsonnault. The halo is the antenna, the two wings control channel selection and the on-off function and the general look delivers a reassuring emotional charge, a sense of efficiency and reliability. At first glance, an object must express without a doubt its function. A good design brings pleasure to all senses.”

SINCE OUR SMOKED MEAT…
In 2014, PROVENCHER_ROY has the great pleasure of welcoming Michel Dallaire to its group where he continued his practice in industrial design and contributed to various multidisciplinary projects as a senior advisor.

In 2018, an exhibition was dedicated to his 50+ years of Industrial Design excellence. The exhibit, held at the Musée de la civilisation in Québec City and called Dallaire—de l’idée à l’objet showcased more than 80 creations, large or small, each imbued with his original style, one where form obeys function and where design is based on sure values such as durability, reliability, honesty.

Based on a series of meetings that took place between 2014 and 2016, journalist Myriam Gagnon signs 268 pages of a book by the same name as the exhibit. She presents the designer’s outstanding works, while also focusing on the process of creation and production, as well as the constraints and difficulties that make up the sum of a designer’s work. An introduction by Stéphan La Roche, director general of the Musée de la civilisation, a preface by curator Sylvie Toupin, as well as an afterword by Lise Bissonnette, former director of BAnQ, complete the book.

To buy the book here 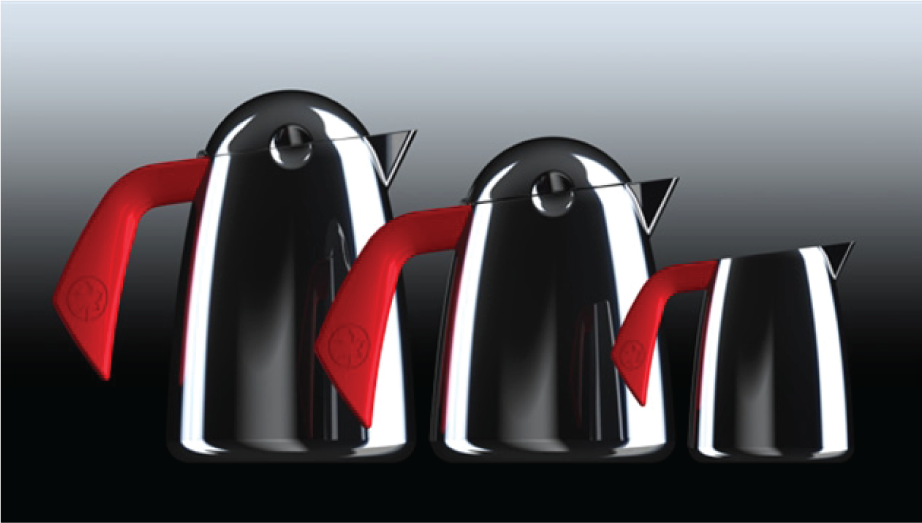 FUEL = CONSTRAINTS
« “For me, to create, I need a problem to solve,” says Dallaire. He thrives on constraints. A prime example is the creation of a complete collection of utensils for Air Canada cabin service. Minimalist and beautiful.

PAROLES, PAROLES, PAROLES (DALIDA’S TUNE)
Who says designers let their work do all the talking! His silver hair and beard perfectly combed, with sparkling eyes behind dark frames, Michel Dallaire talks and talks whenever the opportunity presents itself. An enthusiast who talks about life career with, you’ve guessed it, boundless enthusiasm!