City of Montreal Design Commissioner Marie-Josée Lacroix leads masterfully the Bureau of Design’s mission and team of talents. What a path her career has taken since her nomination in 1991 and before that!

In 2017, the GRANDS PRIX DU DESIGN awarded Marie-Josée Lacroix with the TRIBUTE Award, recognizing the achievements of her career dedicated to the promotion and evolution fo the profession.

Incisive and gourmet questionnaire written by Madeleine Champagne in 2016 for the publication of the GRANDS PRIX DU DESIGN TRIBUTE awarded to Marie-Josée Lacroix, Design Commissioner of the City of Montreal. Article published in INTÉRIEURS 71, Winter 2016 and updated by Juli Pisano for INT.design in 2021.

GINETTE GADOURY – THE WIND BENEATH HER WINGS
Her career began in the eighties alongside Ginette Gadoury during the Info Design Center years of Place Bonaventure. Marie-Josée cherishes a lifelong friendship and gratitude towards Ginette with whom she learnt the ropes in communication and design promotion. Her sincere love for creation and creators, Marie-Josée credits it to Ginette, an inspiring model whose great confi-dence in Lacroix’s abilities became the wind beneath her wings. Respect!

“In life, there are people who give us wings…, said Marie-Josée, on the stage of the GRANDS PRIX DU DESIGN in 2016. I want to share this tribute with the people who inspire me and draw me towards the top. I will first mention Ginette Gadoury, who gave me my first chance, with whom I studied and discovered my “vocation” for the promotion of design. Today it is her organi-zation that awards me this Tribute Award. Ginette, this Award largely comes back to YOU.
You knew how to transmit your passion and your perseverance to me !! I owe YOU / WE ALL owe you a lot. It is high time that we underline, in particular through our unwavering support for your initiatives, your immense contribution to the development of Quebec design.” THEN CAME THE PICARD REPORT
In 1986, Ginette Gadoury, Design Ambassador and Décormag Editor at the time sat on avcom-mission responsible for the Picard Report. The report outlined design as one of the seven stra-tegic axes for the economic recovery of Montreal.

A NORTH-AMERICAN PREMIERE
Five years later, the visionary City of Montreal created a position exclusively devoted to push-ing design as a vector of urban quality and economic attractiveness, and selected Marie-Josée Lacroix as Design Commissioner. A pioneer, she is the first person in Canada and North Ameri-ca to hold such a position in a municipal government. She now has led the bureau for 30 years… and counting!

“And then there was the City of Montreal. I who cherished the spirit of initiative and who am a little insubordinate by nature, would never have remained all these years in the employ of the City had it not been for the confidence and latitude of which I have constantly benefited. This renewed support from my administrative and political superiors who have succeeded each other over the past 25 years (Editor’s note: now 30 years) has been fundamental to the success at-tributed to me today. I could not thank them enough.” FLOWING FROM SOURCE
Where do the influences that nourish the commissioner flow from? From her mother, a woman with an innate taste, who valued the beautiful and the well done, she inherited her refined aes-thetic judgment and her demand for quality! His father, a working, adventurous businessman for Bell that had the family move to several cities of Quebec, then to Paris, bequeathed to Marie-Josée her invaluable faculty of adaptation and openness to the novelty that she is known and loved for.

WHAT ABOUT PARIS?
Paris is where the 15-year-old rubbed shoulders with diversity and fell in love with the city-scape. It is also there that Yvan Berribi, her Economics Professor, introduced her to urban soci-ology, through Henri Lefebvre and Jean Beaudrillard. These thinkers of the object and of the city will be the founders of her interest in design and urbanity. 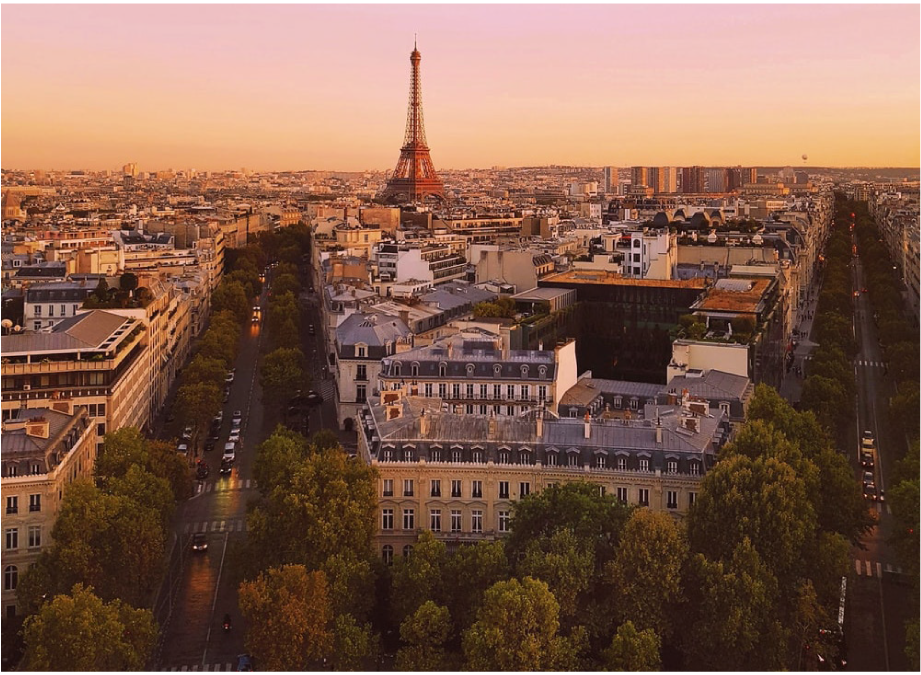 MTL / NYC… MARIE-JOSÉE TEAMS UP
Curious, Marie-Josée enrolled in Environmental Design at the University of Quebec in Montreal and then went for a Master’s Degree in Information Science, specializing in Design and Architec-ture, at McGill in Montreal and Columbia in New York. DOUBLE-THREAT!
With this dual education marked by the human sciences, she embarked her professional life with the objective of combating elitist stereotypes that were still too prevalent in terms of design. She wanted to democratize the idea of beauty and good design, defending the fact that this quality is plural (and deeply cultural) and that it should be offered and accessible to everyone, every-where in a city.

A BALANCE SHEET THAT HAS FLAIR
To make this wish come true, Lacroix and her team carry out around structuring activities of all sorts.

And now … the Montreal 2030 Agenda for quality and exemplary design in architecture and a revival for the post-COVID city.

A fervent protagonist of the opening up of public procurement, Marie-Josée Lacroix actively promotes the practice of design competitions and workshops (architectural and urban) as an alternative and qualitative method of awarding design mandates in the public sector.

In 2016, her office had already supported more than 50 design and architecture competitions and workshops that generated 164 design mandates totalling more than $ 27 million in profes-sional fees for very high-quality Montreal bequests (libraries, sports centers, beach , parks, etc.), summing up to more than $ 377 million in investments. A more than impressive record that has grown steadily since. Marie-Josée Lacroix at the meeting of UNESCO Cities of Design in Puebla (Mexico) walking on the footprint of Montreal, UNESCO City of Design conceived by the talented Montreal designers of Studio FEED.

THE ICING ON THE CAKE: MONTRÉAL, UNESCO CITY OF DESIGN
All these activities are born from Marie-Josée’s deep conviction that the talent and creativity of designers must above all be at the service of the well-being of populations, and that design in the absolute has no interest if it does not allow soften our human condition and stimulate our senses, inspire us to make us grow as individuals and collectives.

And it is really the vision and patient sustained work of Marie-Josée supported on a municipal level that led, fifteen years ago, to the designation of Montreal as a UNESCO City of Design, a title renewed in June 2016. INTRAPRENEUR, YOU SAY?
Intrapreneurship is a concept born in the 1970s in the United States which designates those en-trepreneurs who, within large companies or institutions, set up an innovative and economically viable project. This is what Marie-Josée has managed to create with the Design Bureau within the City of Montreal, thanks to the complicity of successive municipal administrations.

“These honors, I share them with my front-line collaborators, with whom and by whom the mis-sion of the Bureau du design is concretized with pleasure every day. Leading a team of this level is a pure privilege and in itself a guarantee of success. Thank you !“

ACROSS BORDERS
Marie-Josée Lacroix’s interest in the disciplines of design as essential pillars of the sustainable development of cities led her to organize, in 2004, the first international conference on the theme of “new design cities”, at the Canadian Center for Architecture (CCA), followed by a publication, selected by Planetizen as one of the top 100 books on the art of shaping the city in the 21st century. 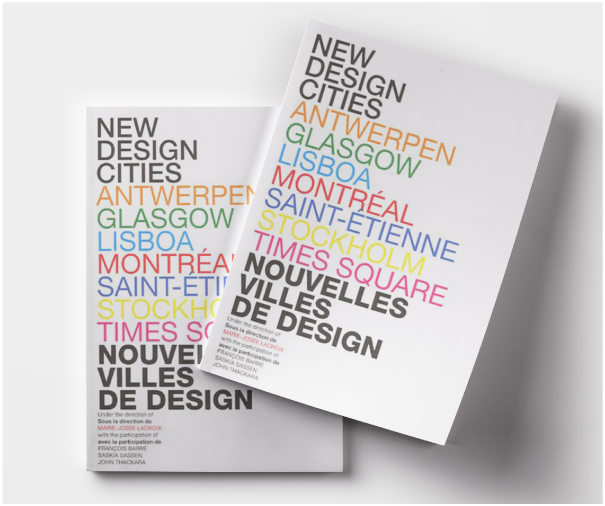 It must be concluded that the convincing expertise of the City of Montreal Design Bureau is now catching on. It is also frequently requested by several cities, ministries and institutions that wish to draw inspiration from it to stimulate quality and innovation in design as part of major public projects.

PARTNER IN LIFE & CRIME
Her journey, marked by success and learning, was carried out by two…
Marie-Josée and Philippe, with whom she has shared her life for 35 years. Both lead careers motivated by the public project. They have in common this desire to contribute, one by promo-tion, the other by teaching and research in design, to the well-being of the city. United for the greater good, let’s say it, of Montreal citizens and citygoers. WHAT’S NEXT, MADAM COMMISSIONER?
“Children should be initiated to gro interest from an early age with programs such as Chibikobe, in Japan, or that of the renovation of a school in Saint-Étienne, France. These programs promote learning in design with the sponsorship of designers and the even more systematic opening up of our municipal commission both to develop the market for Montreal designers and architects and to promote quality services and achievements throughout the territory. And this, both for lasting legacies, such as cultural or sporting facilities, as well as for transitional arrangements such as the competition project won by Kanva Architecture with its concept of an inflatable structure to better experience the site of rue Sainte-Catherine during the works in 2018.“

“Finally, this tribute – which I find by the way a bit early in my professional life – is another testi-mony of confidence that gives me wings… I therefore receive it as an incentive from you, an invitation to continue this project of collective scope that animates me so much, that of making you fully contribute, designers and architects of great talent, to the future and influence of our metropolis, Montreal.“

You keep your word Marie-Josée and you do not disappoint your city! As team leader of the Bureau du design, Lacroix currently oversees the implementation of the Montréal 2030 Agenda for quality and exemplarity in design and architecture, a first municipal policy adopted in Decem-ber 2019, which aims the strategic and transversal integration of quality design processes in all municipal practices. 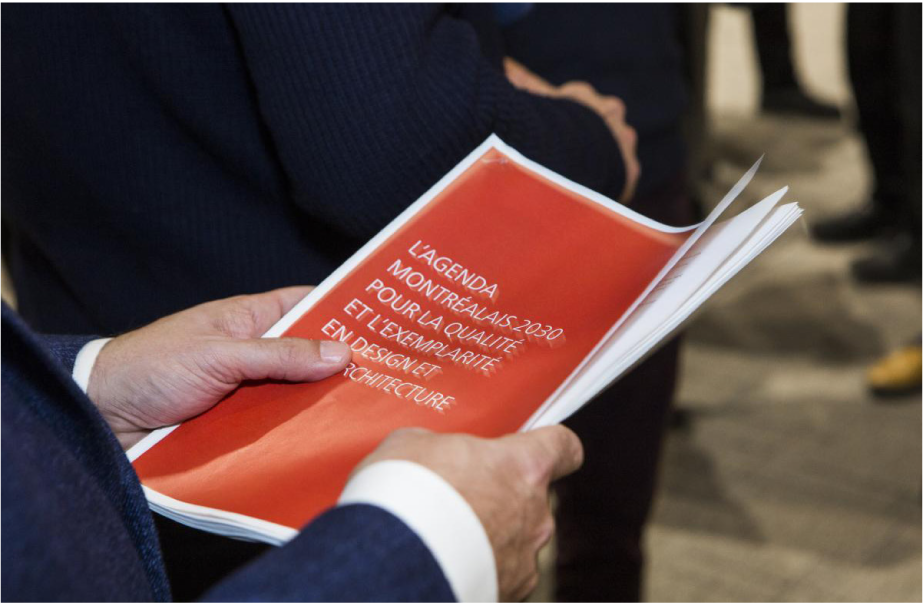 THE BEST IS YET TO COME! THANK YOU, MARIE-JOSÉE!