CONSULT THE ORIGINAL ARTICLE IN
INTÉRIEURS 48

A Minimalist Inside Out! 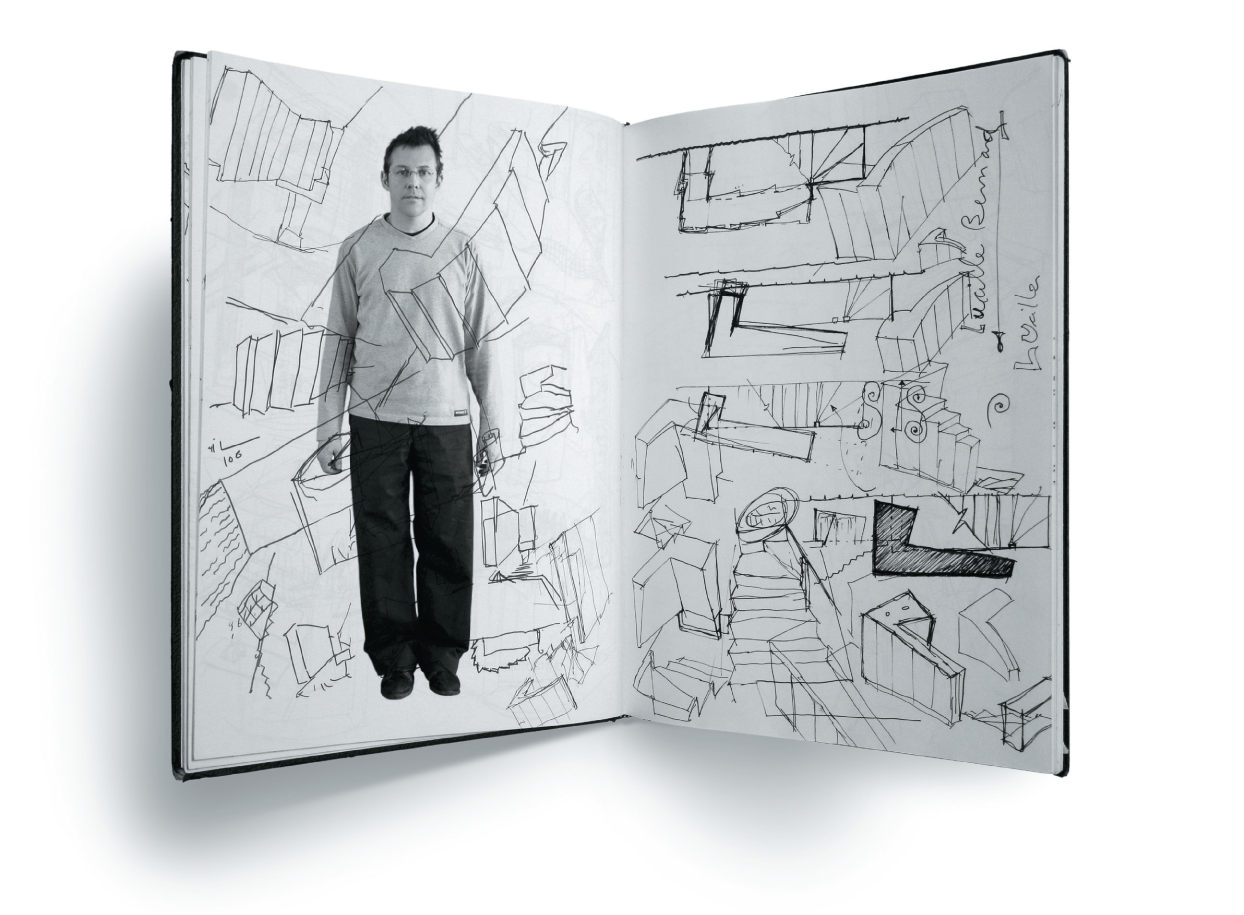 Restaurant design in Montréal and Jean-Pierre Viau have gone hand in hand since the 80s now. The interior architect and his devoted tight-knit team embellish the city through unique and original creating such as the Cogir offices at the Humaniti Tower (2020-2021) or the Mignon Churros & Nuggat Food Court Counter. 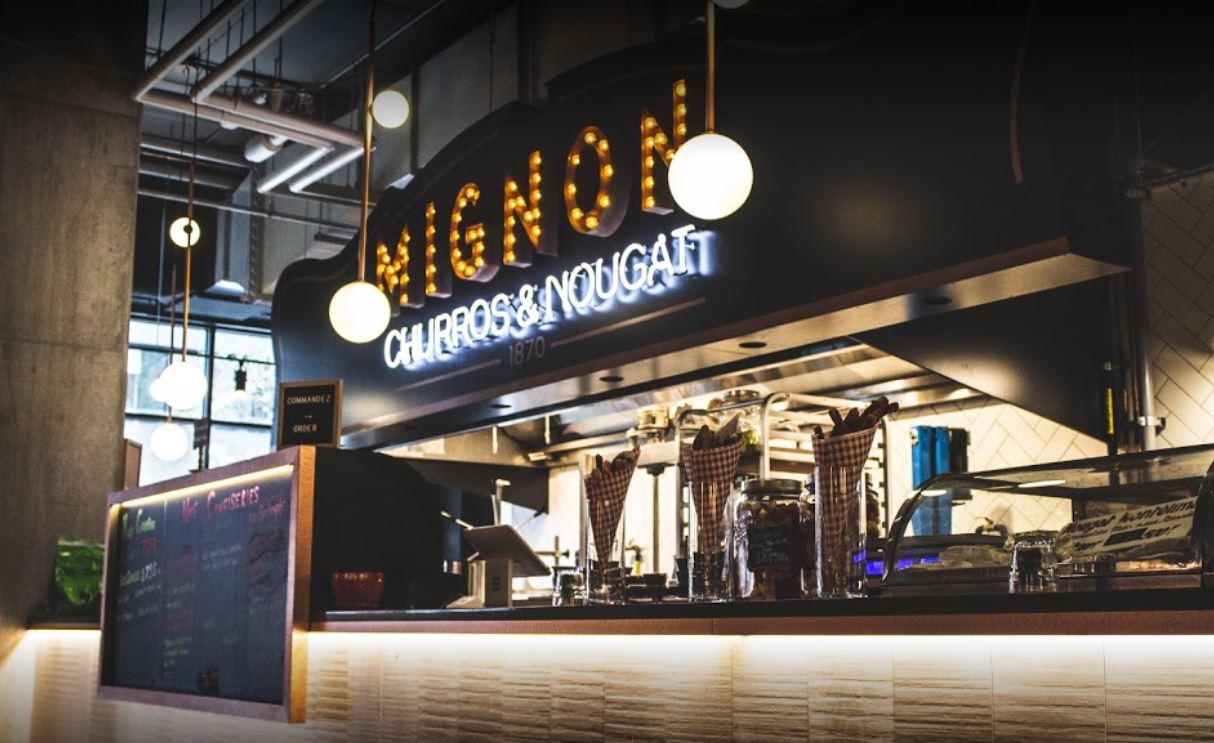 HOW CAN A PICTURE OF A MONKEY CHANGE THE COURSE OF THINGS? 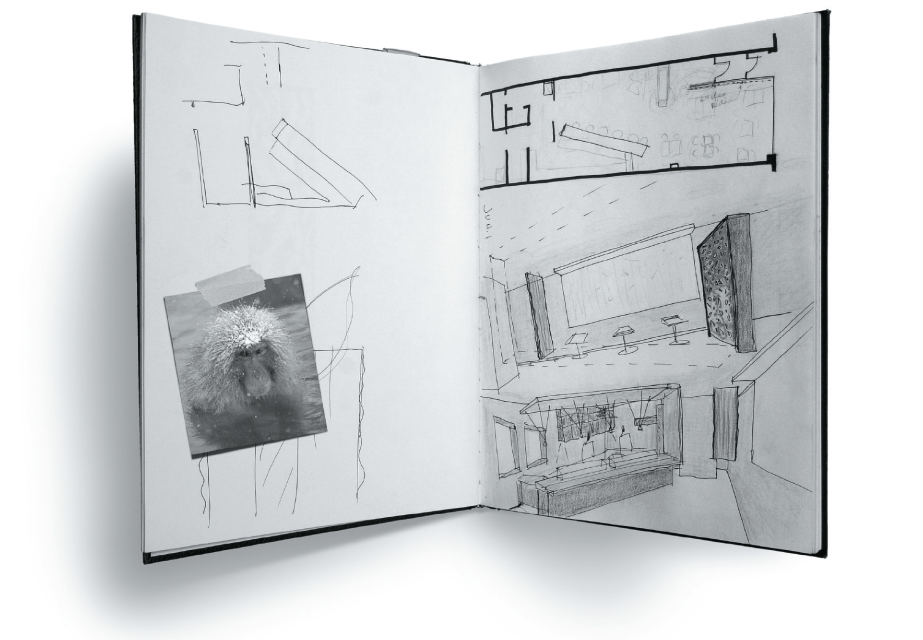 Once upon a time, there was a Japanese chef Junichi Ikematsu who, when his Soto restaurant closed, wanted, discouraged, to return home.

Enters Viau, offering to design a restaurant for him, with little budget and lots of flair! The chef is happy. Viau is too.

And so lands JUN I in the 2005 urban jungle of Montreal, the first oriental restaurant exhibiting a “Nordic” theme. No bamboo on the horizon. We rather entered a space with large blow-up of trees in the winter, fur chairs, velvet galore, a new way to deliver sushi and sashimi imagined by Viau. 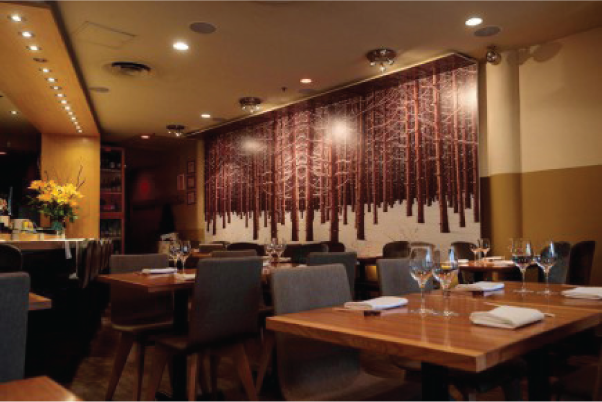 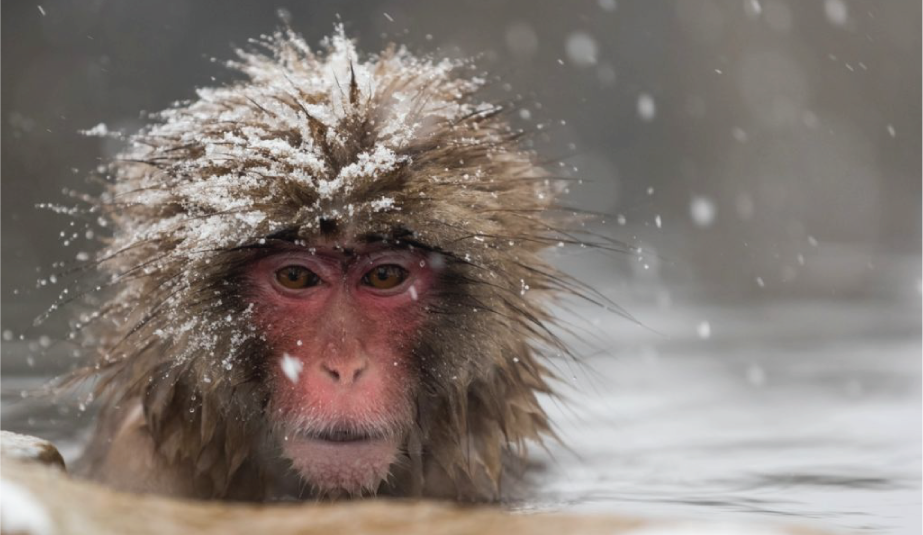 The flash of genius? A snapshot of a monkey frolicking in hot springs (the famous macaques with snow on their face, waddling in the hot springs of Jigokudani Park. Yes, yes… it snows in Japan!
And, yes, yes, Japanese food can be decline otherwise than with bamboo! Kampai!

AND THIS WAS NOT THE FIRST TIME VIAU CHANGED THE GAME!
This rewrite is not the first. Remember the Citrus, signed by Viau. This is how history played out. 1989, Normand Laprise, who has since gained a world-famous reputation notably with his Toqué restaurant, became chef at the Citrus restaurant located on Saint-Laurent Boulevard in Montreal.
This was the beginning Laprise’s notoriety, but also that of Viau. Highly rated on the food side, the IT place of the early 90s reinvented what a trendy restaurant could look like. Far from Louis XIV chairs or other golden or silver flaflas. Viau had served!
And PS: Laprise and Viau became partners in crime for life! Brasserie T followed, Le Toqué, the chef’s private residence and tralali et tralala. FROM CHIANTI TO PIZZA
For more than 30 years now, Jean-Pierre Viau and restaurant interior design have gone hand in hand.

As proof, the trendy Pizzédélic pizzerias, another of Viau famous 1990s makeovers! The trendy pizza place’s characteristically sharp decor at the time was 180 degrees apart from the che-ckered tablecloths of the traditional neighbourhood pizzeria. Immediate success.

25 years later … Chianti, pizza and Viau still pair wonderfully! Nowadays, it’s the Pizza 900 res-taurant owners who have entrusted the talented designer with the task of developing their dining room concepts. AT WORK, BETWEEN THE SHEETS
Long before the days of confinement-mandated home offices, Jean-Pierre was a pioneer who loved to work in bed!

The bedroom, his favorite place in his home, is where we chooses to transcribe ideas, draw sketches and design interiors, jotting down every thought in a bland black notebook, with an or-dinary Pentel pen. Well supported by his comfy pillow, he feels free, open, inspired. Fun fact: More than a hundred restaurants have been designed in Jean-Pierre’s bed … kind of makes you crave a breakfast in bed, doesn’t it! 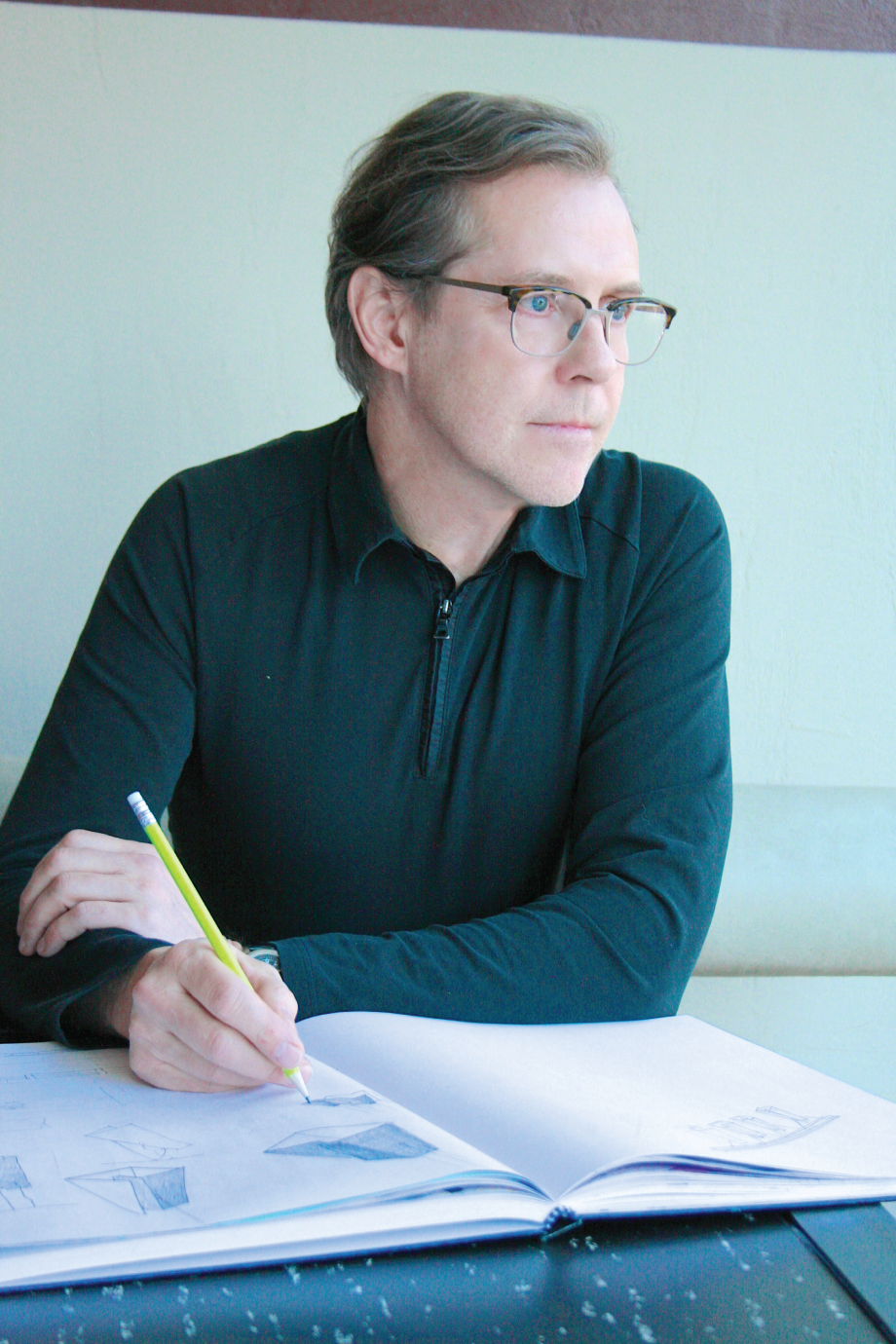 I AM A BORING GUY, HE SAYS!
His career came about without a magic potion, a guru or an initiation of some sorts. His path seems assembled like a Lego set… and what a game! Block by block, he solves problems and does not do “pretty”. He hates shopping, isn’t particularly fond of furniture and does not give it to fashion! He rarely goes out, doesn’t dwell in entertainment and travel very little. This brings him to repeat, with the smile of the Cheshire Cat from Alice in Wonderland: “I’m boring, boring, bo-ring.”

But beware! Don’t be fooled! Under the guise of a wise little boy with blue eyes (“aquamarine” insists Madeleine Champagne), he is a daring, a brave man who reinvents design each time he sets to work, with “a wink, an oops and even an oupelaille!”.

He also practices self-deprecating humour with a rare flair. There is simply no more discreet and anti-stardom than the charming Viau!

FROM TOQUÉ TO MAGNAN, A MAN FOR ALL SEASONS
There’s never a copy/paste in Viau’s projects… but always an intelligence we know to be his! Consideration, daring, “shaking” people without provoking them. He speaks on behalf of the masses and for all kinds.

Do you know of many interior designers who can successfully design both the most posh res-taurant in town (Toqué) AND the most popular of popular taverns (Magnan)? And what about the Make up for ever Cosmetics shops, the Fillion Électronique stores, his very first restaurant, the Cafeteria… Jean-Pierre is a designer for all seasons! HE ALSO READS IN BED!
Thrillers by the ton, not literature. Always. Even before Professor Langdon was called upon to demystify the Da Vinci Code. Thirty minutes every night, to be carried off in Morpheus’ arms. Intrigue, questions, reasoning, intrigue, questions, deductions and… zzzzzzz… to be continued tomorrow! 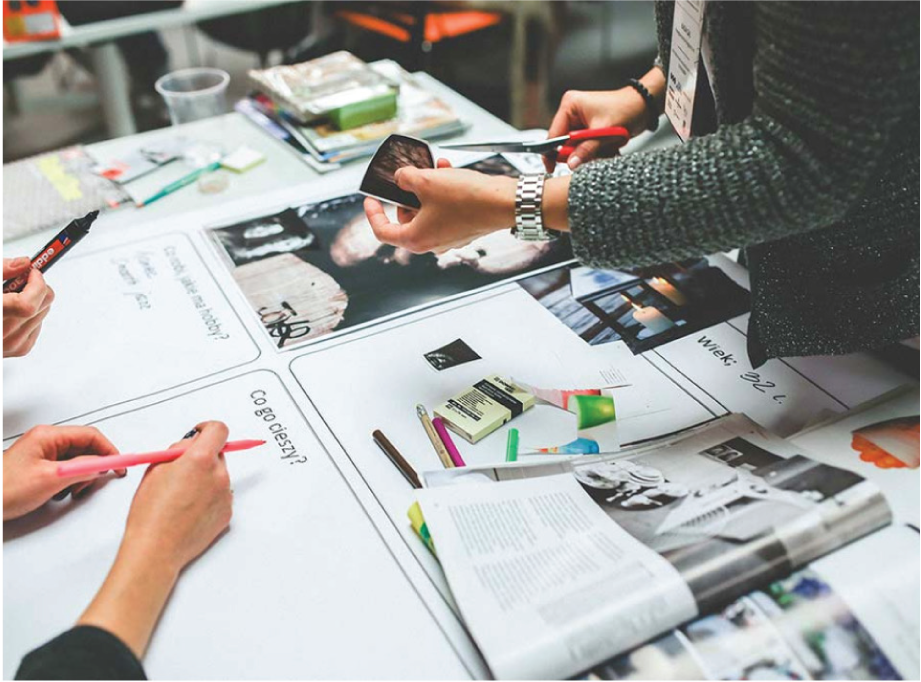 ACCIDENT, NIL, RETURN
A serious bicycle accident in the early 2000s plunged Jean-Pierre into a coma that would last for many weeks and involve a long remission. Two guardian angels, watching closely, came to his rescue.

The first: his team of seven, a seven-headed angel who took over the management and creativi-ty for two years.

The second: Les chèvres (goats) de Monsieur Beausoleil. Claude Beausoleil is one of the greatest restaurateurs Quebec has known. He is also the one who gives Viau a first creative challenge after his long convalescence, the design of the restaurant Les Chèvres, a vegetarian restaurant that would have a completely new look, in no way respecting the catechism agreed upon for vegetarian restaurants. A great achievement accomplished at a slower pace of 3 days a week thanks to the complicity of Mr. Beausoleil.

Read more about this story… 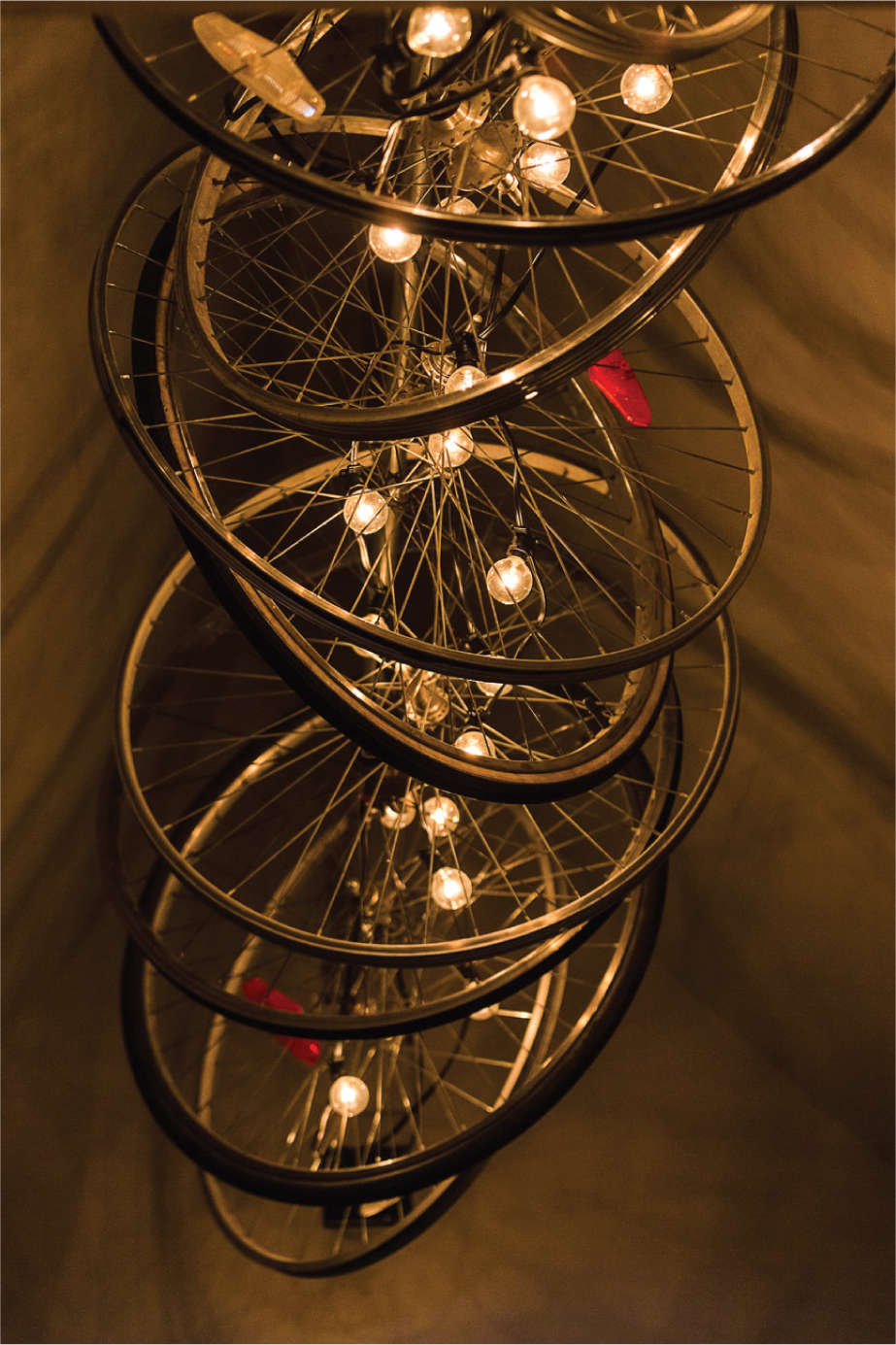 2017. Boulevard Saint-Laurent.
A new microbrewery offering beer lovers a wide selection of hops as well as tasty dishes is set to open on the Main.

Viau embarks to create a raw decor with soft industrial airs and fun references to the world of cycling, the preferred mode of transportation for city dwellers in the neighbourhood.

Here, bicycle parts are transformed into chandeliers and decorative objects that capture atten-tion and create identity. 2008. A refined residential decor, inspired by the surrounding nature… Colourful!

AH COLOR, TELL ME WHO ARE YOU?
The man has a strange relationship with color. Sometimes, he would like to put them all in one decor without anyone noticing them! Other times, he says to himself: why be subtle?, and opts for a bright red colour like that of the Toqué’s kitchen counter. When drawing, he deliberately uses the wrong colours to prevent customers from falling prematurely in love with upcoming details. “My drawings are never final. I don’t want to commit to colours too early on either!”

MONTREAL LIKE A SLOW TANGO
He likes Montreal’s nonchalance, the two entrance buildings of the Jacques-Cartier Bridge and then, not much more, except the extraordinary resilience of the City.

He has a special affection for the Mile-End district, however! From top to bottom, east to west! Although he said he would adapt to living anywhere, he stayed in his neighbourhood. St-Urbain, Fairmount, Hutchison… these are the streets and alleys that he has made his own. Duddy Kravitz’s apprenticeship of Mordecai Richler hits close to home! Today, the chosen neighbourhood is where Jean-Pierre grows his tomatoes and hunts the squirrels… a national sport!

ON YOUR MARKS…
His mother and his father, a Montreal city mechanic, bequeathed a precious heritage to Jean-Pierre, his brother and his four sisters: respect and a strong sense of responsibility.

We can almost see JP as a young Cub, a Boy Scout and then … a great Boy Scout Leader. And we can easily imagine him greeting guests during his three-summer gig at Terre des Hommes (Expo 67), working as a parking attendant, transport agent and then security guard. This man inspires confidence.

ONE AWARD, THEN ANOTHER!
Over the past 3 decades, the commercial projects signed by Jean-Pierre Viau Designer have not only given the city and its key places a new look more than once, they have won honours and distinctions in the process. Here are some of them, awarded a GRANDS PRIX DU DESIGN Award in the last ten years!

The interior has a modern Scandinavian look featuring polished wood details and a striking man-darin-orange wall in the kitchen for a delightfully joyful and refreshing decor.

The aim? To create a space with a subtly masculine vibe, while still remaining warm and wel-coming. There is much to please the eye: glass window o ers patrons an opportunity to observe the chefs working in the kitchen, and an even more sophisticated feature is the large sliding doors, which give diners a view into the room where cooking classes are held.

The gourmet urban decor is complemented by a bookcase filled with cookbooks and a display of Patrice’s mouth-watering creations.

Article about the project here 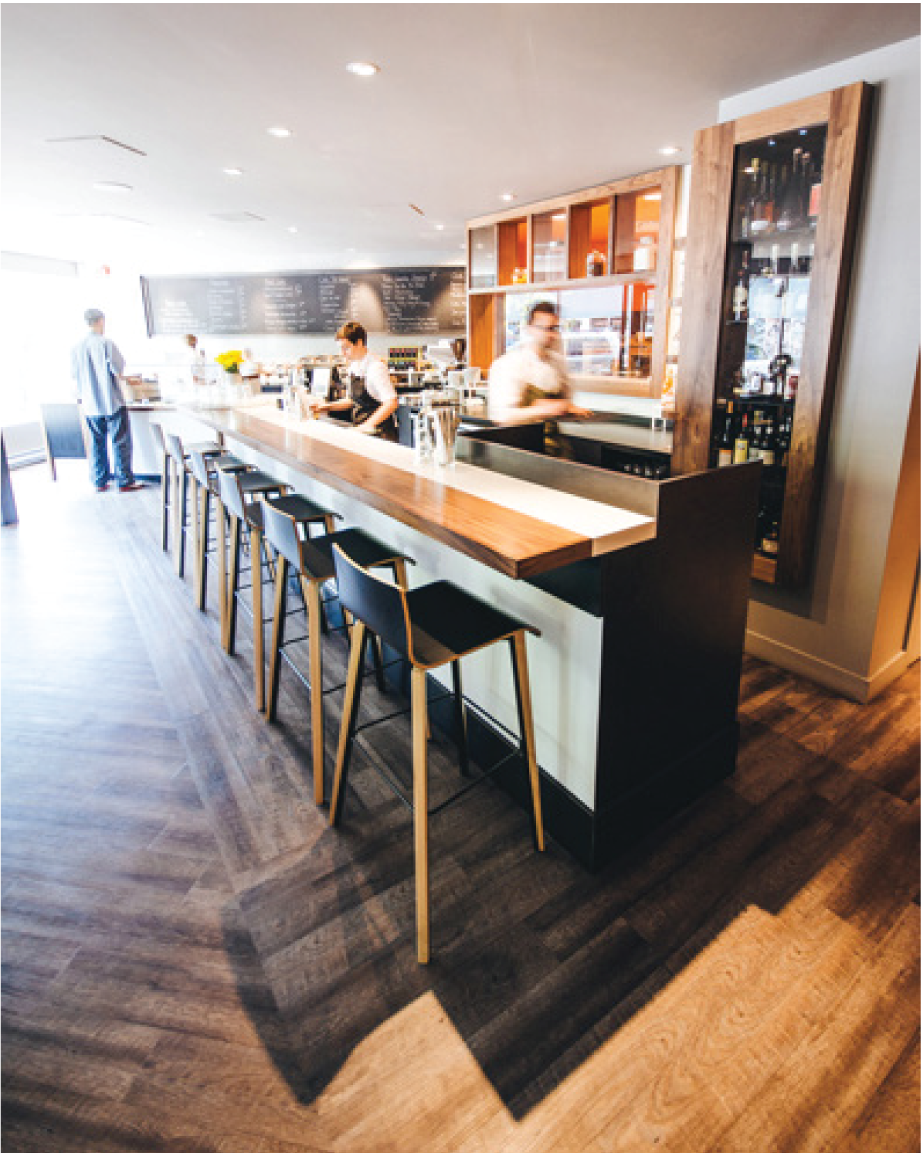 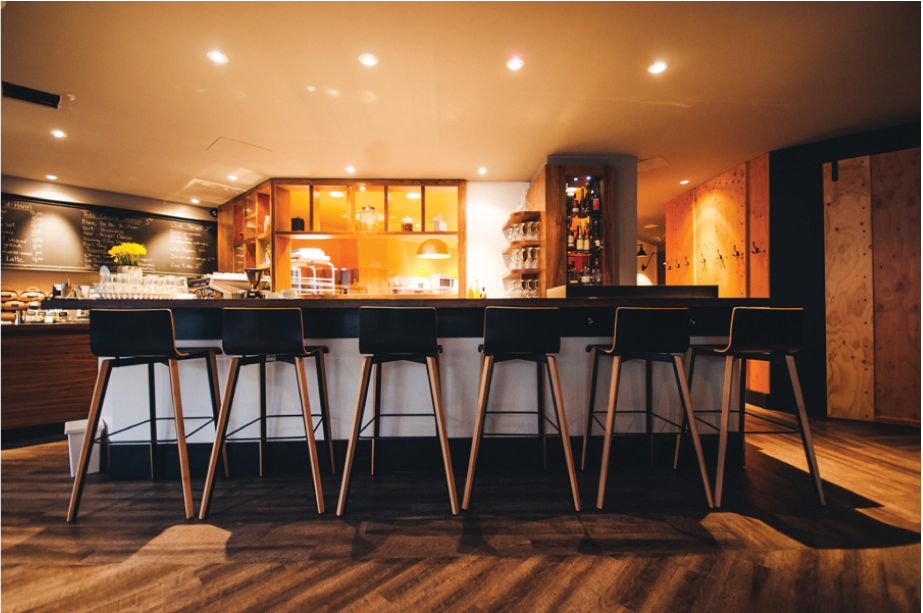 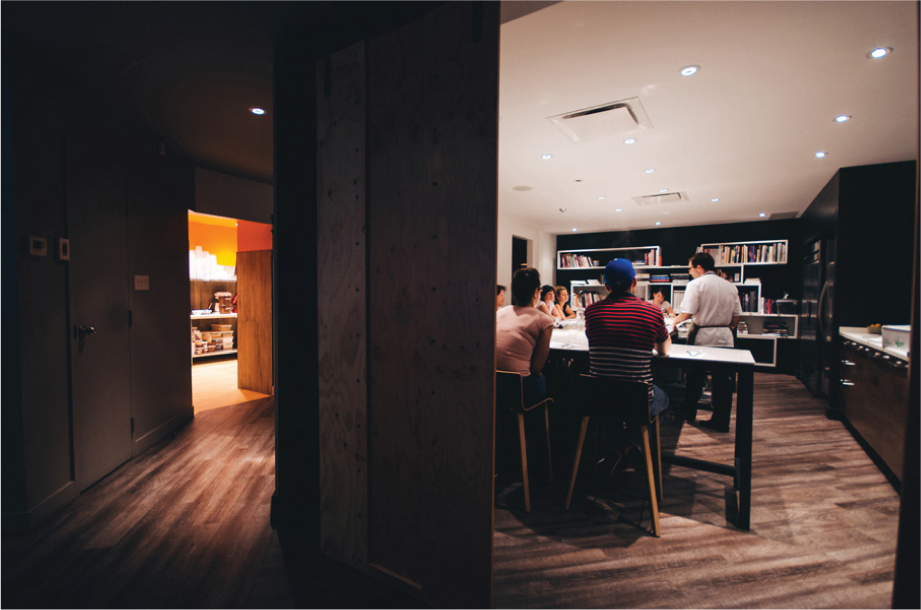 Supporting the arts and culture has always been an integral part of George Laoun Optician’s business plan. So, it was no surprise when in 1999, the company settled into Montreal’s Musée des beaux-arts. When the store was moved into another building area, necessity often being the mother of invention, a meeting between the Laoun family and designer Jean-Pierre Viau was arranged through the Museum… for a fruitful collaboration that has produced an outstanding result, earning Viau this award. 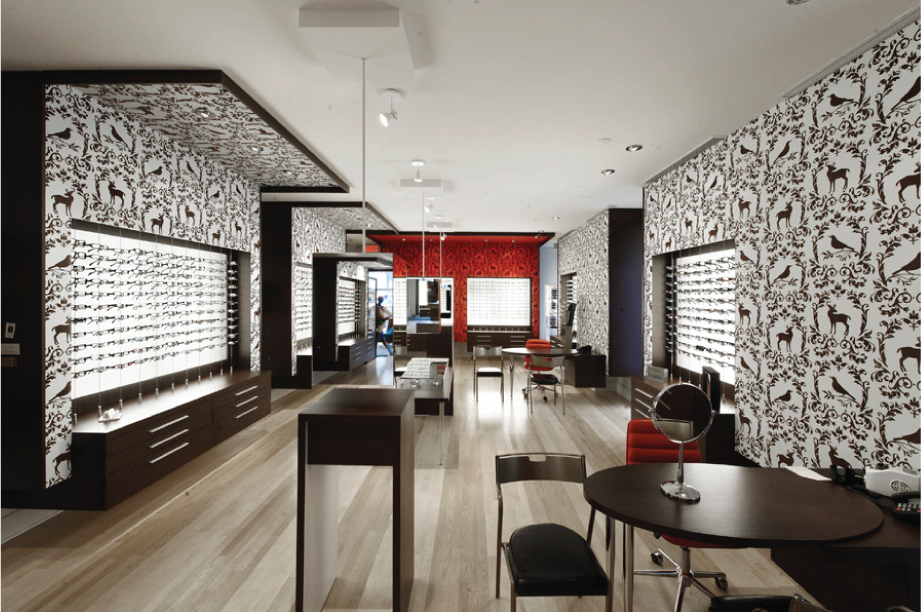 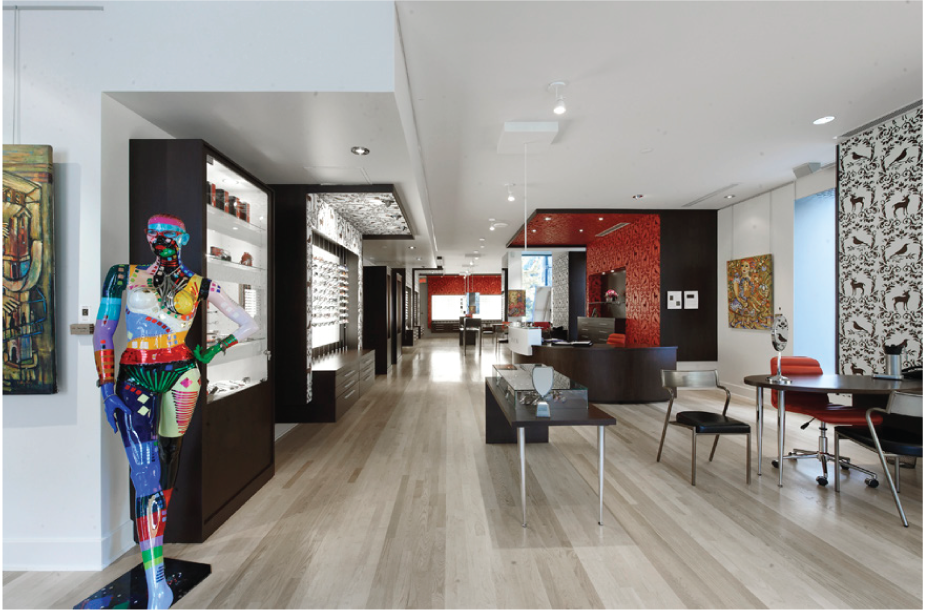 At all stages of the project, the guideline was focused on the company’s artistic mission and the opportunity for artists to exhibit works of all kinds around the store. The space needed to be designed to display a wide range of art pieces.

To achieve this, Jean-Pierre Viau has created a bright, streamlined space. Among other design strokes of genius, the idea to raise the display racks above the ground enhances the airy feeling inside the store, with spectacle frames floating as in zero gravity.

Article about the project here

Consult the other projects of JEAN PIERRE VIAU here