DESIGN IN CHARLEVOIX
The past Reinvented

Written by Diane Laberge – YKQ Média and published in INTÉRIEURS 63, SUMMER 2014.
Updated by Juli Pisano for INT.design in 2021.

The harmonious blending of the old with the new has become a popular design trend.

From Baie Saint-Paul to La Malbaie, from l’Île-aux-Coudres to les Grands-Jardins National Park, the Charlevoix region’s heritage is worth discovering and its ethno-design, worth seeing. 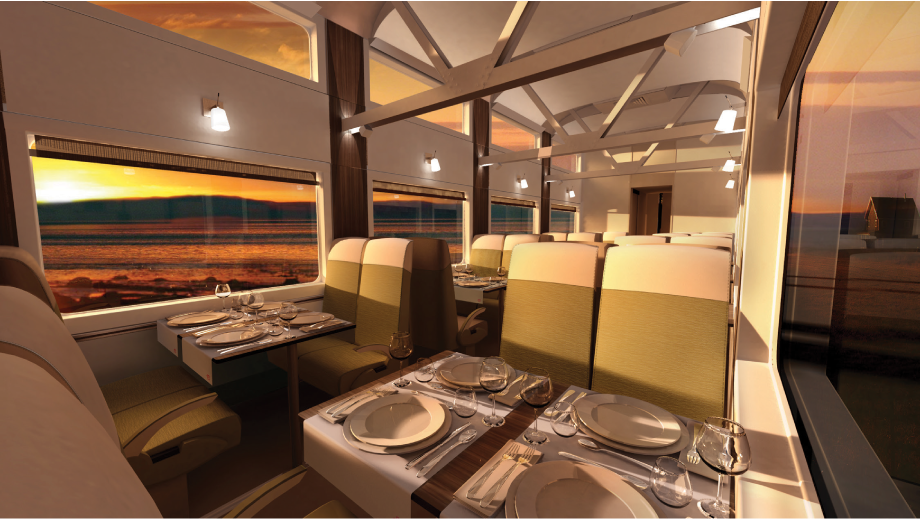 The railcars’ 11-foot vaulted ceilings and panoramic windows o er superb views of the St. Lawrence River and the Charlevoix mountains that pay tribute to the beautiful landscape of the Charlevoix region, a UNESCO World Biosphere Reserve.

On every table, an iPad displays visual and audio information, providing passengers with cultural references during the entire trip. Poetic texts from local authors adorn the cars’ exterior panels for all to see and read, like a big open book… 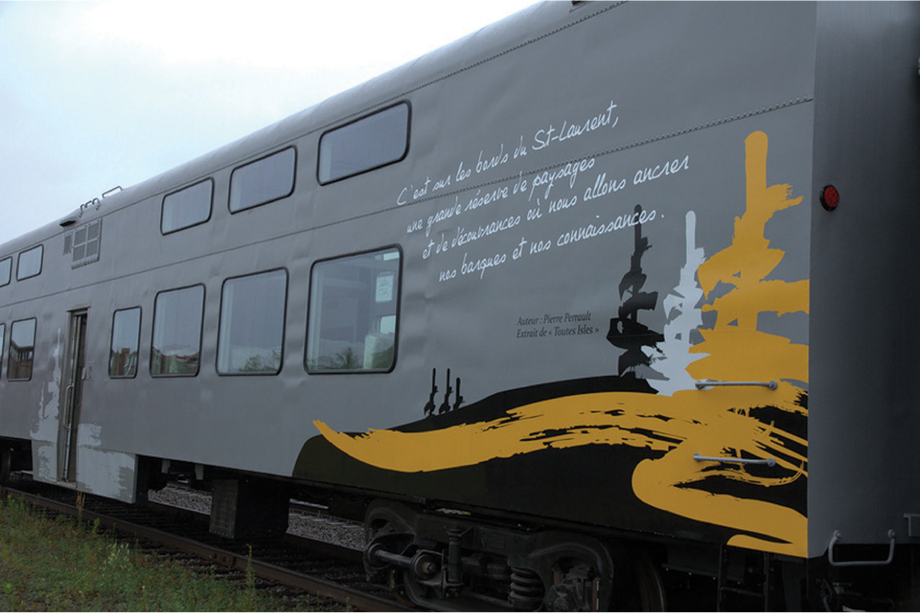 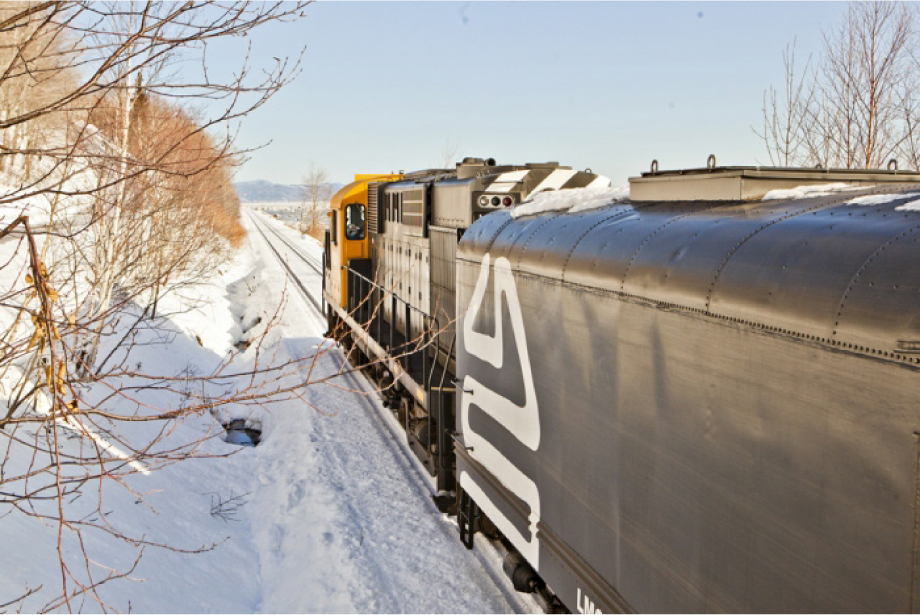 STATION BLÜ
This deluxe spa resort, located on the outskirts of the Charlevoix region, has won rave reviews in leading international magazines including Condé Nast Traveller UK, which named it one of the five must-see spas in the world. The developer wanted a contemporary looking building that would showcase the exceptional characteristics of the natural landscape, much as a ring sets or a sparkling diamond. 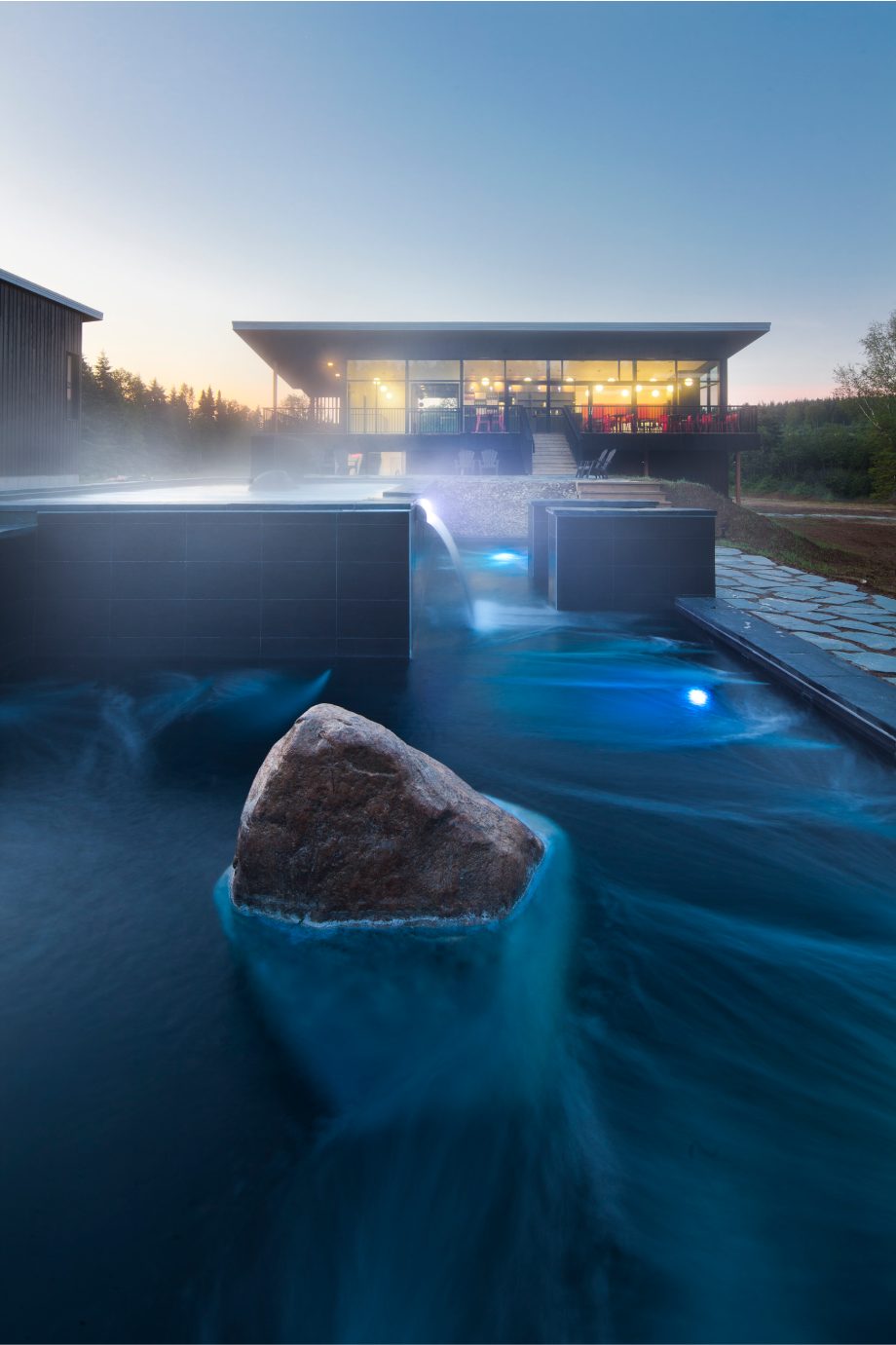 Designed by architectural firm Blouin Tardif, the three modern pavilions, built near the river, with large windows that o er expansive views of the surrounding nature, feature materials inspired by the region’s barns, such as wood siding and sheet metal roofs. 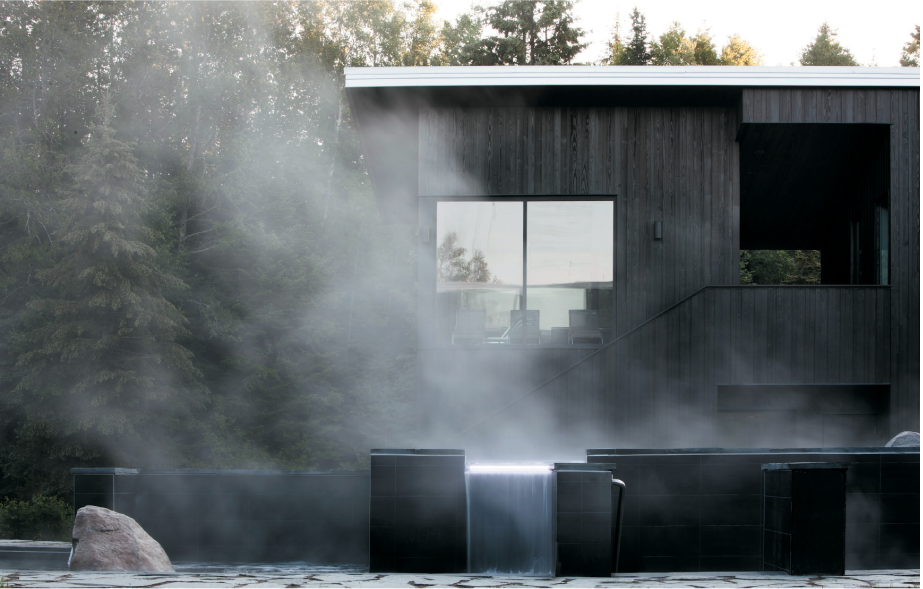 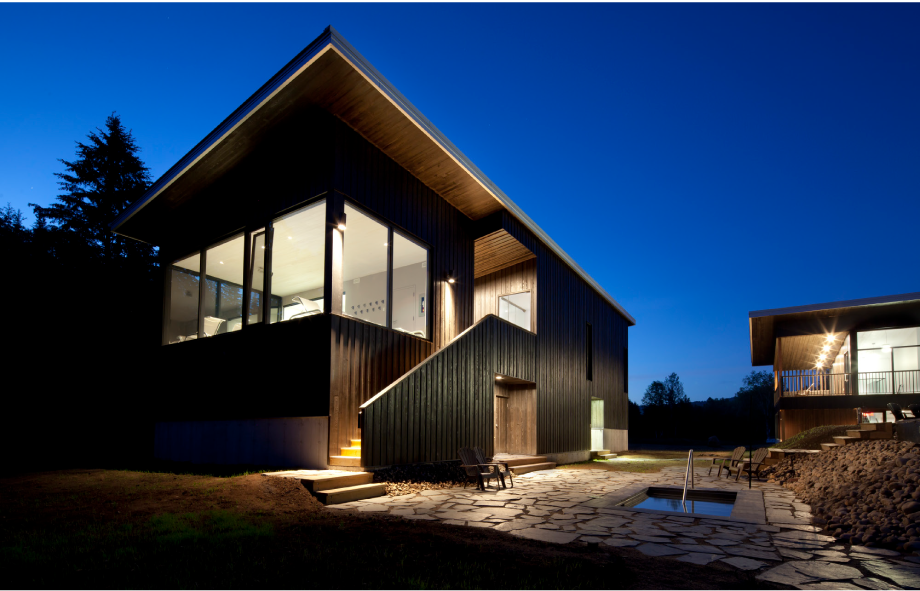 MUSÉE D’ART CONTEMPORAIN DE BAIE-SAINT-PAUL
Inaugurated in 1992, the Museum stands on the site of the former Le Laurentien cinema.

Which was architect Pierre Thibault’s prime source of inspiration to create a spacious hall identical in size to that of the old movie theatre. A number of balcony seats had been salvaged from the dilapidated cinema, and an image of one of them was incorporated into the museum’s visual identity. The result is a building that draws from the past to build the heritage of the future. 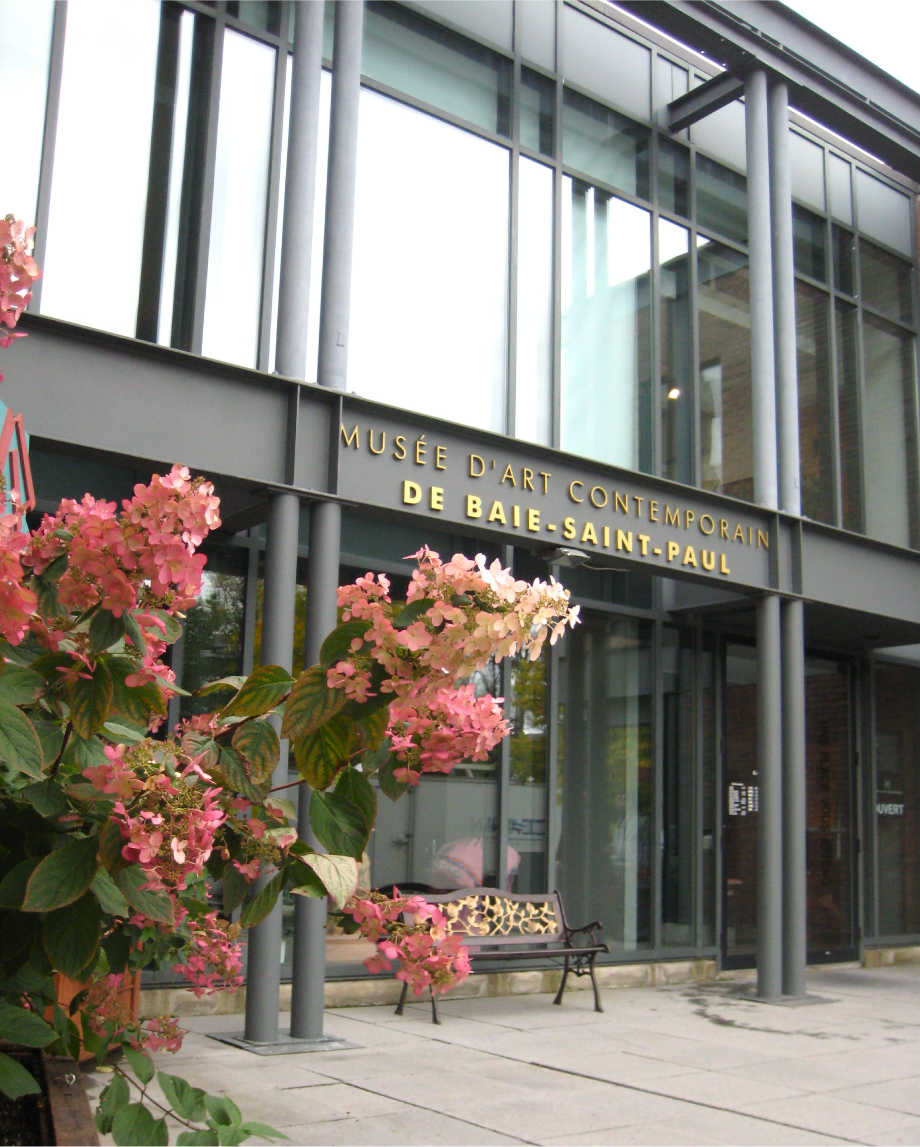 The Museum hosts an extensive collection of contemporary art, acquired in 1982 following the participation of some of modern Quebec’s greatest painters—Riopelle, Sullivan, and many others—in the International Symposium of Contemporary Art of Baie-Saint-Paul, an annual event now in its 32nd year and attended by Quebec, Canadian, and international artists.

LAURE CONAN LIBRARY IN LA MALBAIE
Rather like a modern sculpture, the new library, designed by the architectural consortium of Bisson ACDF Desgagnés Architectes – celebrates the area’s urban and natural heritage, using a “story to tell” approach that sets o the spectacular scenery.

Erected on a high plateau overlooking the majestic St. Lawrence River and with a design influenced by the seascape and the characteristic Charlevoix clapboard houses, the building incorporates such natural materials as stone and wood, a reminder of debris left behind on the shore after high tide. 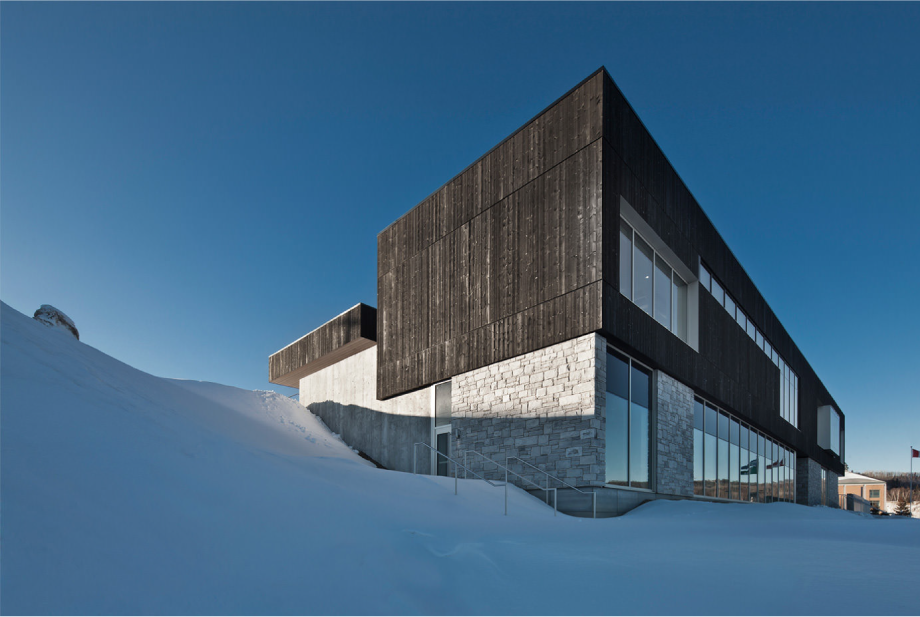 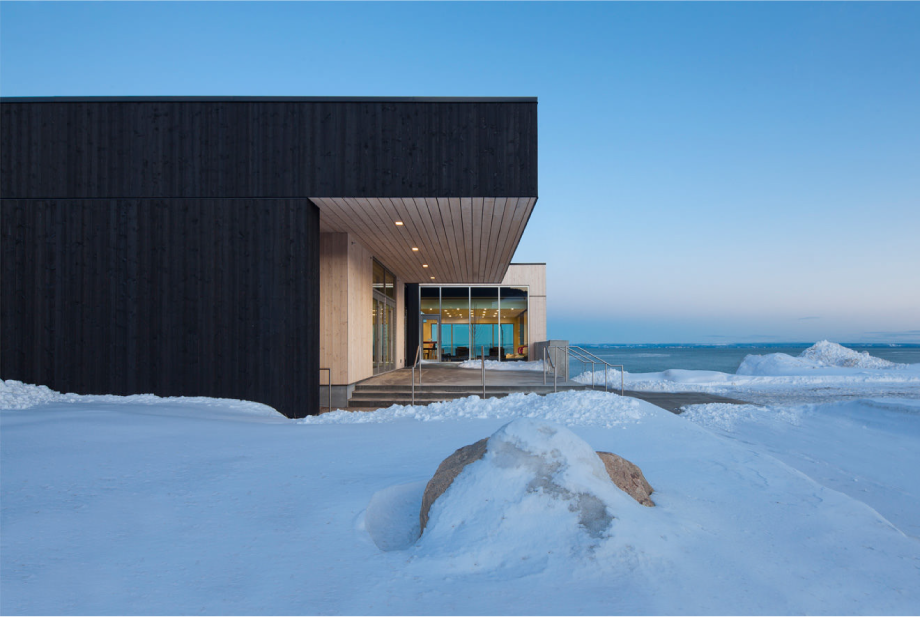 Spacious rooms, bringing to mind wide open balconies, o er an expansive view on the river and an opportunity for visitors to enjoy moments of quiet contemplation.

THE BELL TOWERS OF THE PETITES FRANCISCAINES
Baie-Saint-Paul was named one of the Cultural Capitals of Canada. To highlight the occasion, architect Guy Simard was entrusted with the task of installing lighting on the bell towers and domes—built in early 20th century—of the Petites Franciscaines de Marie convent. 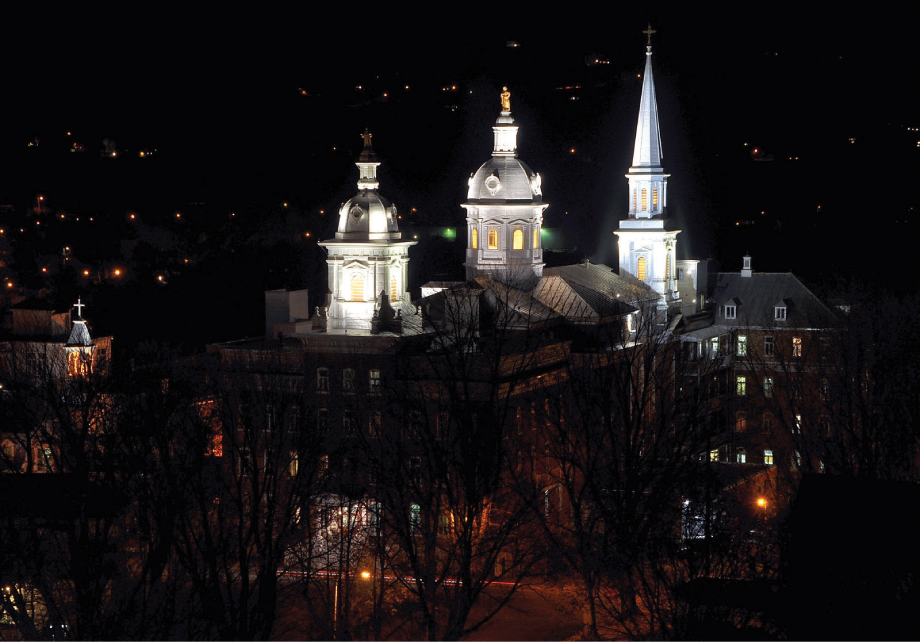 The floodlit ornate pinnacles that rise up into the night sky carry great historical, traditional, cultural, and religious symbolic resonance, and in this way serve to shine the light on over a century of missionary work in the community.

“Architecture is a marvellous expression of the process of discovery.” – Glenn Murcutt, architect

Les Terrasses Cap-à-l’Aigle residential development in the Charlevoix region, completed by MU Architecture, exhibit the wisdom of this quote, through the many examples of ingenuity evident in the project.

Nestled on the escarpment overlooking the Saint-Lawrence River, the village of Cap-à-l’Aigle is renown for its stunning natural beauty and built heritage, two reasons the area has long been a resort destination of choice. Nevertheless, this small corner of paradise was a happy discovery to the two designers behind the project. Sought out by a developer who was besotted with the Charlevoix region, they decided to explore the Charlevoix land through architecture.

Any blend of natural surroundings and architecture will involve a judicious selection of exterior mate- rials; after all, they constitute the case that protects the jewel. As they wanted to source Quebec or Canadian know-how and materials as much as possible, the architects chose red cedar and recycled, stained barn wood for Le Phare, and cedar shingles for Marée basse. With the Terrasses du Cap-à-l’Aigle project, the architects also wanted to pay tribute to the cultural landscape. Starting with a vague but very present desire to help contribute to the definition of contemporary Quebec architecture, Charles Côté and Jean-Sébastien Herr included many references to the region’s architectural heritage.

While never glaring, these took the form of elements adapted from traditional construction, not to preserve a tradition but to reinvent Quebec’s material culture.

A reinterpretation of architectural heritage can translate into a more radical break with the past. For practical reasons of insulation, the traditional Québécois home was built with only small openings. As Jean-Sébastien Herr notes, “We once lived in very closed spaces, in houses that did not open to the outside. But today’s technologies allow us to do that and take advantage of these spectacular views!” The Marée basse residence is a beautiful example of the application of this concept. Composed of two off-centered volumes positioned in such a way as to take in as much sunlight as possible and offer a stunning view of the river, the whole house forms an angle that embraces a vast terrace, which extends towards the river, like a beach. 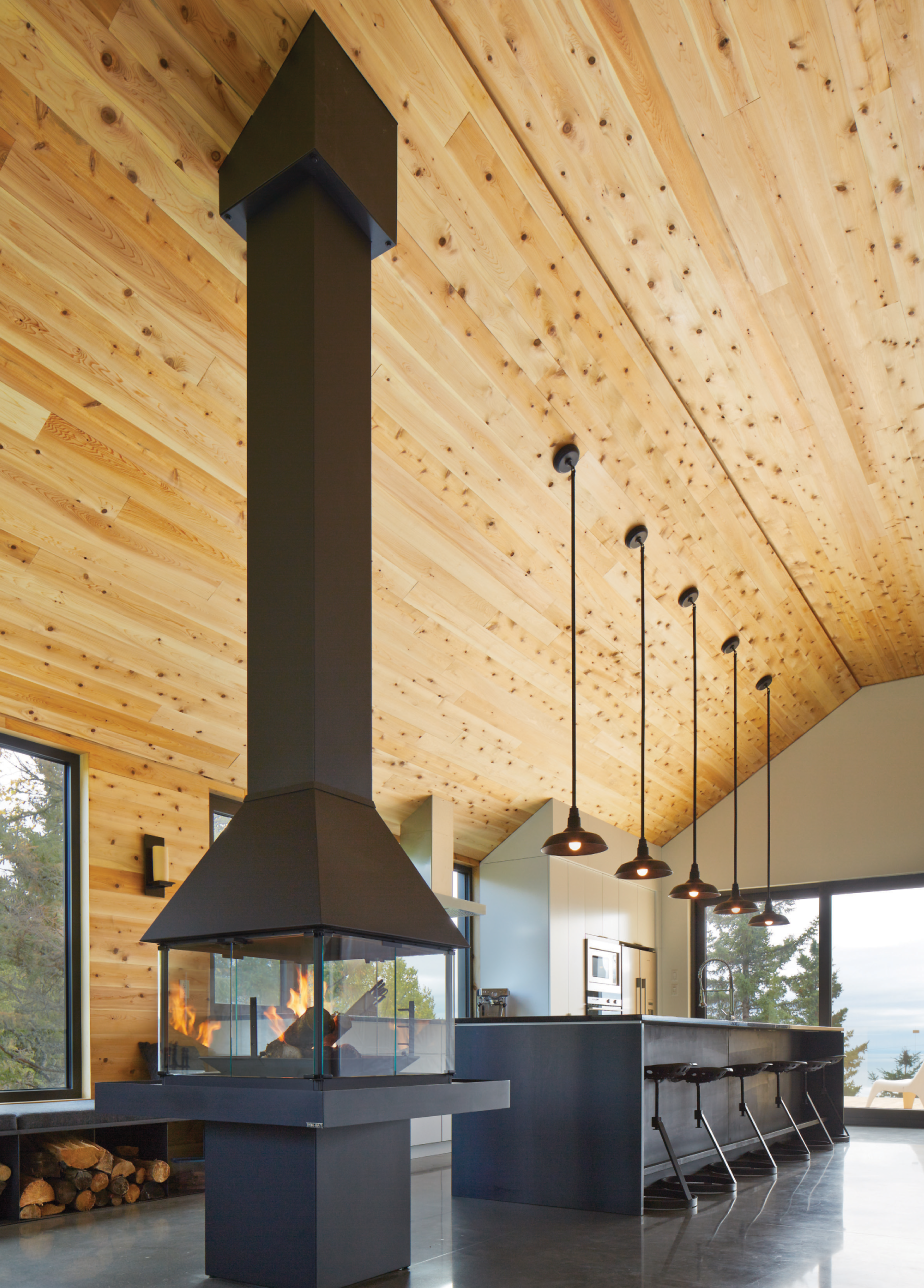 These buildings, something of a cross between single-family homes and resorts, take their cues from nature, were built using local know-how, and reinterpret the built heritage to create living spaces that reflect contemporary Québécois culture.

If you’re ever in the Charlevoix region, you can even rent one of these splendid houses. Discover or rediscover this corner of paradise starting with this remarkable architectural project.

Might it be for a weekend of cultural and gastronomic discoveries topped off with cozy night stays at a fancy hotel or for a weekend of clamping and hikes, the Charlevoix region, a mere 4 hours away from Montreal and 90 minutes past Quebec City shines and inspires! Not convinced? I’d bet the Marc-Aurèle Fortin and Jean Paul Lemieux of our heritage would disagree! To know more and plan your Charlevoix vacay:
tourisme-charlevoix.com