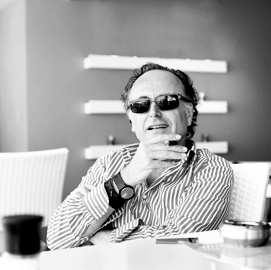 Hans Fonk (Amsterdam) is founder, publisher and photographer of OBJEKT International and OBJEKT USA|Canada. Hans started as a successful international fashion photographer, working for Cosmopolitan, Flair, Elegance and many more magazines. Decades ago, in San Francisco, he was asked to photograph interiors and he did this with great success. In this field his fame also spread out like a wildfire.

His special view on interiors, architecture and arts resulted in OBJEKT©International and many book publications including all the stars of the international interior design world. Together with German publisher Teneues he released the book ‘OBJEKT©International, luxury around the world’, in 2015. His photographic art resulted in many successful exhibitions, as for example, the exhibition ‘China rocks’ in Beijing. One of his main achievements is OBJEKT©International, the authoritative and bespoke title for the upscale urban modernist with a passion for interiors, art & antiques, modern design and outstanding architecture. Thanks to the general concept, often unexpected topics, choice of designers, professionally organized distribution around the world and quality of the photos, OBJEKT©International has gained the highest authority in its field. It won the award for “Best Interior Design Magazine in the World” in Los Angeles among others. The magazine was first published in 1991. The English edition was released in 1999, Russia followed in 2009 and in 2012 China and South Africa joined the team, each publishing their own edition. In 2015 the totally new special edition for Asia with English/Chinese text was launched in Beijing. OBJEKT©USA | CANADA was launched in 2016. The magazine continues to surprise with its global adventurism in a world of creativity, never compromising on the exceptional quality of the publication. In its pages a unique fusion of classic and modern styles is complemented by the inimitable images from the internationally renowned photographer cum art director Hans Fonk. Recently an all new digital edition has been published for a more experimental approach to the world of design and architecture: far beyond the common scale.