WATER IN A BOTTLE

Limited editions, renowned designers… the movement persists. Revamping the water bottle, an everyday object and elevating it to an object of conversation or of collection has been a common practice for decades. Made of plastic, or better yet, glass, some resemble luxury perfume bottles and others look like they were literally sculpted from ice! Since the Evian drop that opened the millennium to the water kingdom, packaging water in a bottle has become a key to success.

Sometimes inspired by haute couture, nothing less, sometimes resulting from a new search for eco-responsible materials, here is our selection of innovative water bottles, over time and from all sources…

Treeson water bottles are different in that they are biodegradable and made from organic materials. The cycle to works once the bottles are shipped back directly to Treeson after use via a pre-applied label on the bottle. In other words, instead of depositing the drank container in the recycling bin, the rehydrated drinker simply drops it in the mailbox.

Once they reach the processing plant, they are ecologically reprocessed and become ready-to-drink water bottles again. If that weren’t enough, for each additional bottle sold, the company replants a tree. Green footprint at zero and socioecological awareness times a thousand!

EVIAN, FROM LACROIX TO ABLOH
To see more about the project here

In 2008, Evian seized the opportunity to partner up with fashion designer Christian Lacroix and launch a limited series of glass bottles, decorated with lace patterns, edited and sold in over a million copies.

At the same time, Lacroix designed an haute-couture version, Evian Palace, a sculpted doll with a spout that then cost a trifle of 5,000 euros. 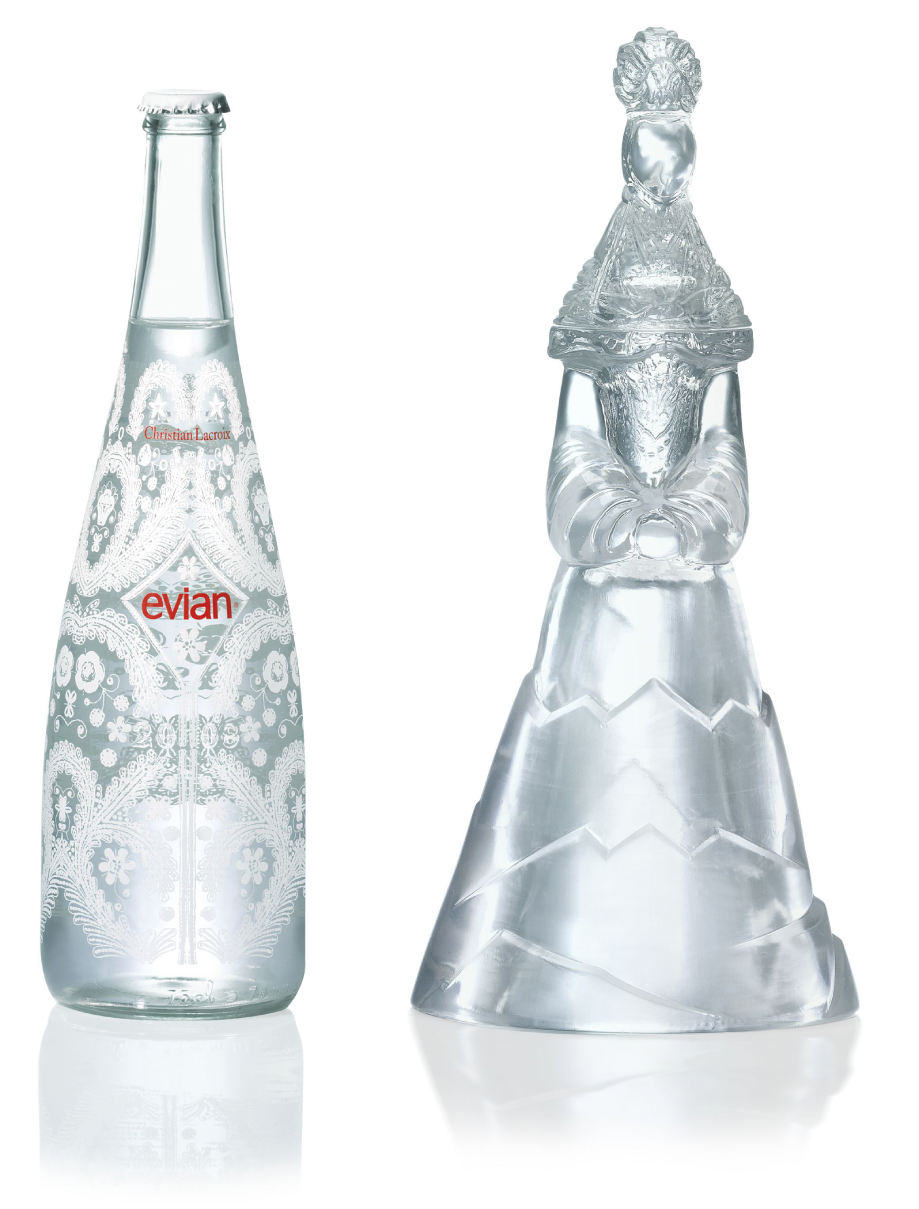 An annual tradition was then born and has continued ever since. For the past two years, American architect and artist Virgil Abloh has joined the impressive lineage of talented designers such as Alexander Wang, Jean Paul Gaultier and Chiara Ferragni and accepted Evian’s invitation.

Virgil’s 750mL bottle features a unique design inspired by “Activate Movement”. The signature blue dots represent water droplets which symbolize the ripple effect created by a single action as well as the hope that this project will incite a ripple effect of sustainable actions. EVIAN, BACCARAT AND GAULTIER…
THE POETRY OF THE FORM
To see more about the project here

After the 2009 ready-to-wear edition of the Evian bottle, designed by Jean-Paul Gaultier, Evian teamed up with the fashion design and the luxury jeweller Baccarat to create five exclusive, limited-edition bottles. Five unique translucent bottles resulted from the collaboration and evoked the best asset of Evian: purity. 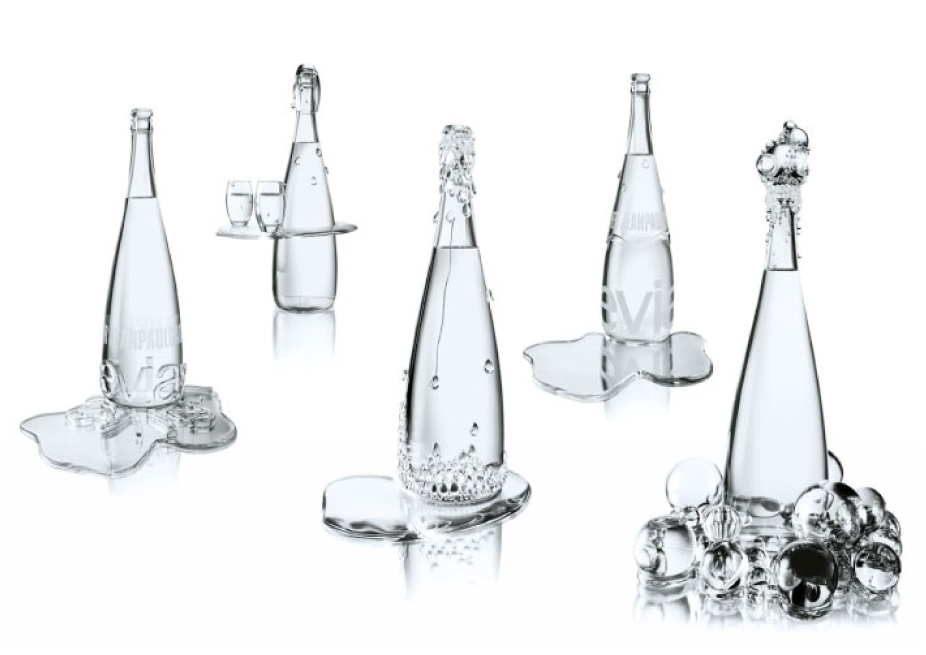 The bubble bottle, the drop bottle, the tray bottle, the reflective bottle and the Spring bottle. Five exceptional creations showcasing the tremendous craftsmanship and artistry of the Baccarat crystal maker and the boundless creativity of designer Gaultier. 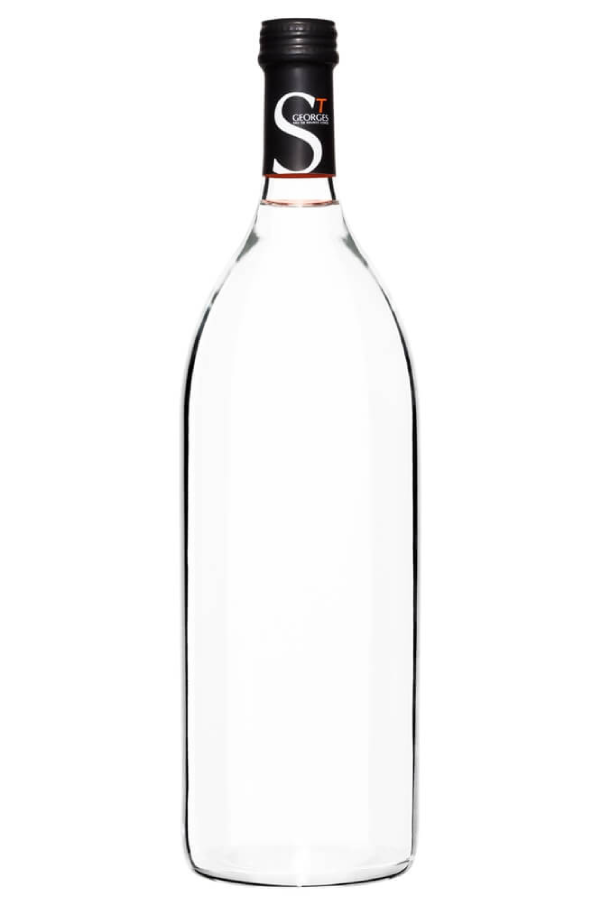 A meeting as magical and true as they can come! This is how Alexandre Colonna d´Ornano sums up his collaboration with designer Philippe Starck, whom he first met when he was only 21 and took the reins of the family business Eaux Saint-Georges.

A true fan of Starck’s work, he naturally turned to the designer who, in return, was deeply seduced by the young CEO’s daring approach and the accuracy of his request. He replied a few weeks later, propelling, with a stroke of his pencil, Saint-Georges waters to the top.

15 years later, Philippe Starck was given the mission to minimize process operations and optimize the weight of the bottles. His solution is to add grooves on the center of the bottles, reducing matter and costs.

A perfect clean and slender bottle and its black cap to suggest the Corsican flag.

OGO BY ORA-ITO
A water shooter, anyone?

Shaped like a ball, the bottle imagined by Ora-Ito, the brand name of designer Ito Morabito for a Dutch water with added oxygen, was imagined as “an object to be placed on the table and replace both the carafe and the glass ”, explained the designer of simplexity … simplicity in its complexity! 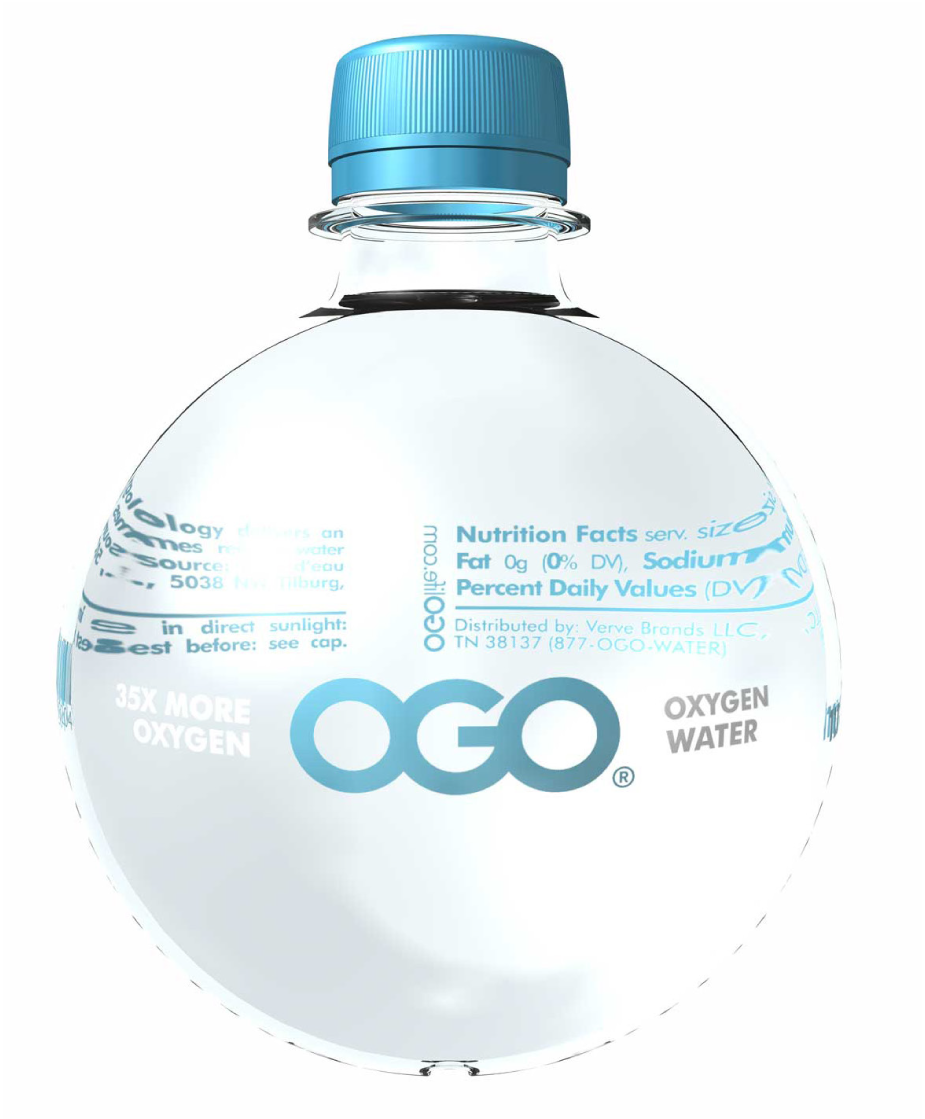 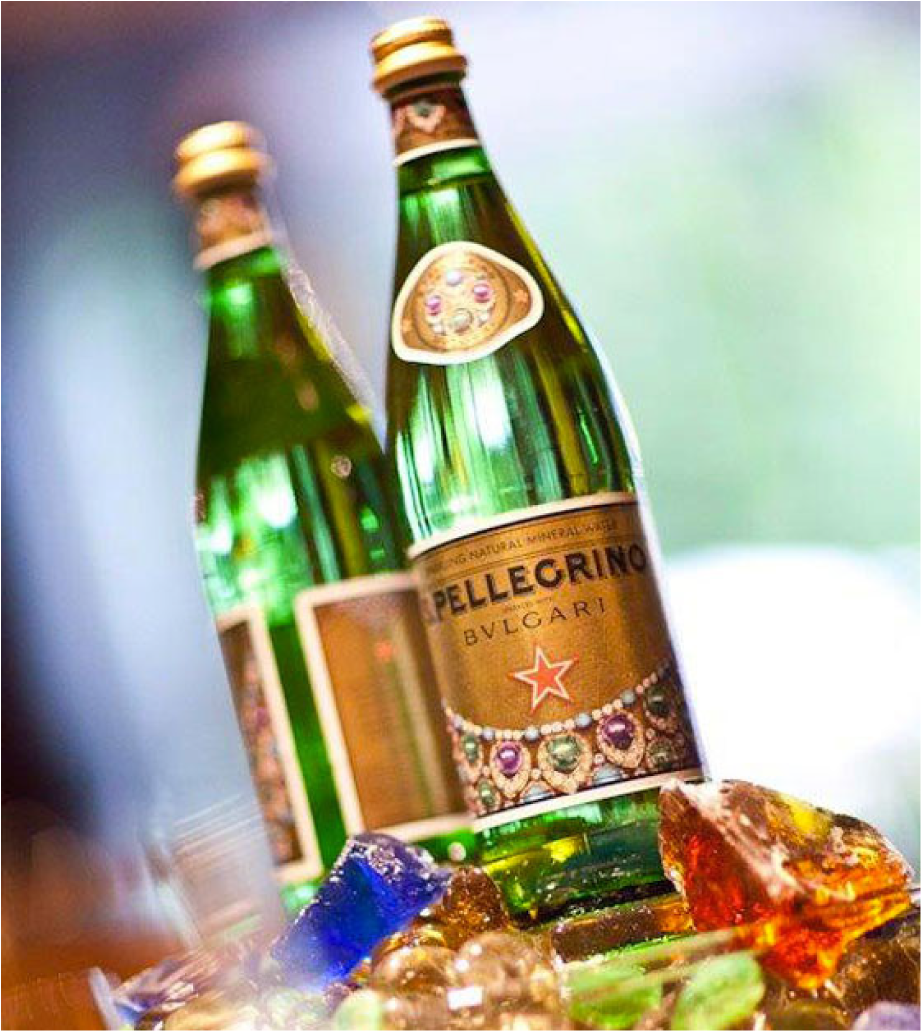 SAN PELLEGRINO, BVLGARI-STYLE
To see more about the project here

To commemorate luxury jeweller Bvulgari’s 125th anniversary in 2011, San Pellegrino Waters teamed up with Missoni and created a tribute bottle for Bvlgari.

The bottle exuded the attractiveness of the brand’s precious stones, printed on the limited edition bottle label. Although these are not real crystals, the pattern, colour and sparkle catch the eye and elevate the product, while remaining true to the traditional standards of quality and purity of San Pellegrino water.

Recipient of the 2008 Good Design Award, the PET plastic bottle designed by Canadian designer Karim Rashid for Japanese water Finé is absolutely sublime. Nothing stands in the way of the container and its content’s fluid elegance… and elegant fluidity! 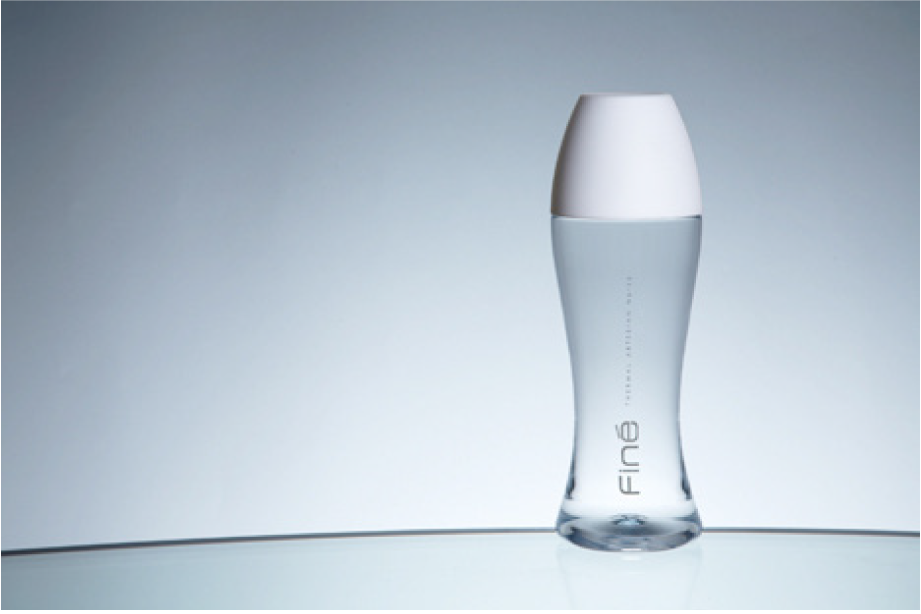 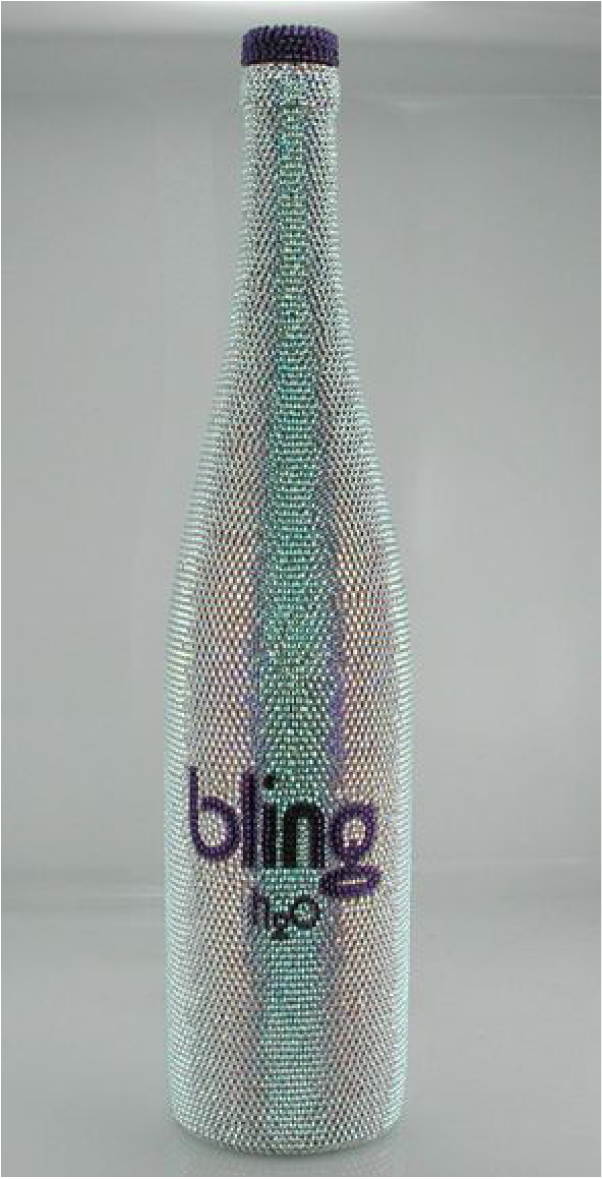 BLING H20 AND SWAROVSKI… BLING, IS NOT SAYING MUCH!
To see more about the project here

Ten years ago, Swarovski teamed up with a Tennessee water company to create a product addressing the luxury niche: water bottled in a frosted glass bottle, set with Swarovski crystals, nothing less. We stand speechless … but hydrated!

Curious to shop the collection? There’s something for every luxury level wanted! The Ten Thousand, sporting 10,000 hand-laid crystals as its name literally suggests, retails for USD 2,700. The Original model, sells for USD 38.98.

Bottled water costs more than gas, they say … it’s never been as true as in Bling’s case!