To say that office design owes a lot to Douglas Ball would be an understatement. The truth is that the industrial designer’s career path is paved with innovations that have turned the industry upside down, time and time again.

When told his design is “revolutionary”, Douglas says he prefers the term “evolutionary”.

When discussing the Race system he designed for Sunar, for instance, he says it was the “end result of his thoughts”. According to Ball, form is the materialization of a concept, and a concept can only be born from in-depth thinking. 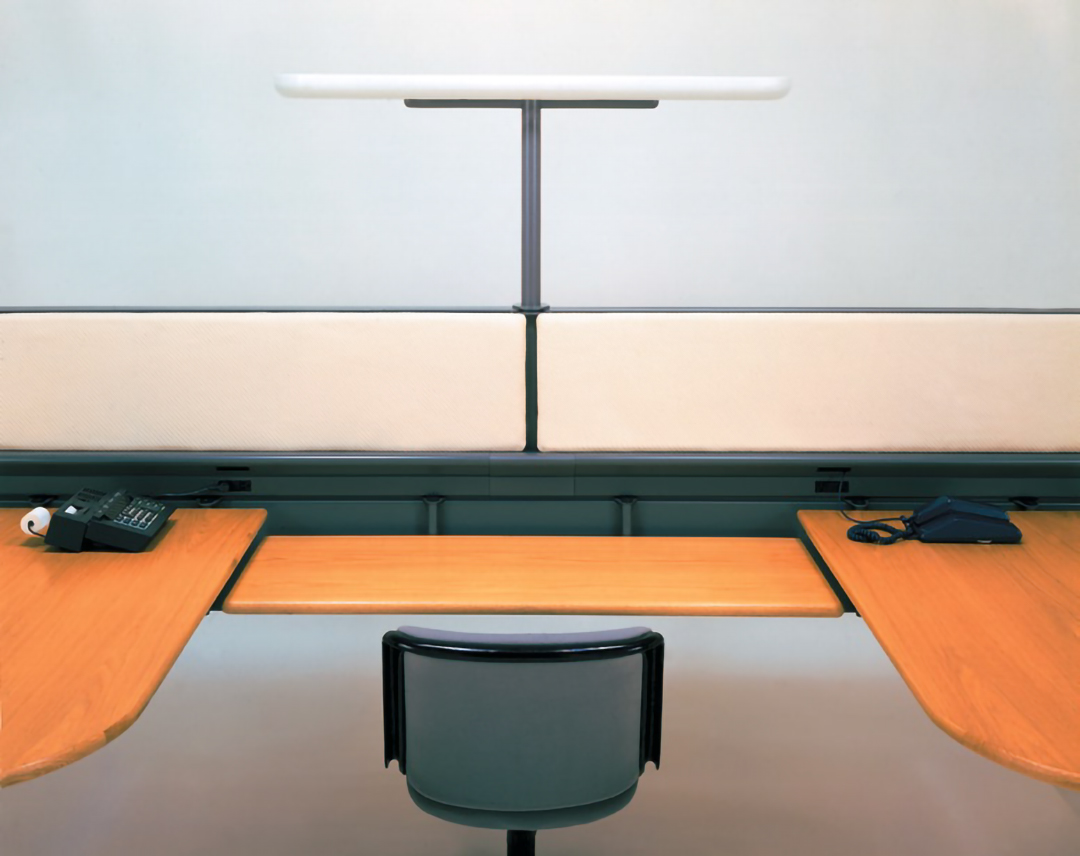 The Race separator, of outstanding simplicity, is efficient because of the high-intelligence concept behind it. It hid wiring—running wires through thin joists supported by connected posts — and the housed working spaces, with desks, screens, cabinets and lighting fixtures clipped onto it.
The famous cubicle, the cornerstone of any firm’s cost effectiveness, remained a key element, but within a clutter-free environment, easy to work in and even elegant thanks to the refined design and polished finish of the system. 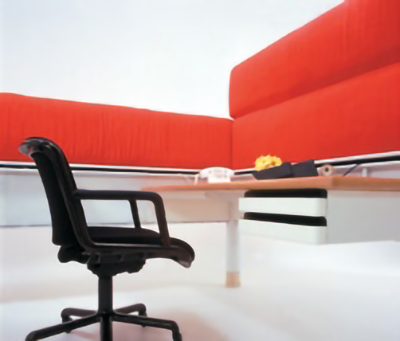 In short, it was an entire novelty in the office world. What’s not revolutionary about that?

In 1978, Race was presented in Chicago and scooped four gold medals and one silver medal as well as the Best of the Competition award. Sales in North America exploded. Furthermore, Race opened the doors of the European market to Sunar.

Race marks the apogee of the Ball/Sunar collaboration. “The quality of the concept and fabrication was so high that the Europeans though this was a German product.” Three decades later, Race is still produced (Haworth).

But this was not the first masterful collaboration between Doug Ball and the Ontario manufacturer.
In 1966, the Chair 4554 had penetrated the American market. The following year, the modular furniture F System was to position Sunar in the United States as a state-of-the-art firm to reckon with. In 1969, Ball propelled his client onto the international scene with the S system, whose components could be clipped without any tools. In 1978, Douglas designed a screen with integrated acoustic for Sunar. It was a first in the industry. The cover was simply a tube in knitted nylon that was put on like a sock. No one had foreseen such a success in 1964… except for Douglas Ball himself, who had just been hired by Sunshine Office Equipment as a consulting designer. He immediately announced that he wanted to design furniture that would sell abroad — among other places, in the United States — and suggested the firm should change its name to “Sunar”, a “radically modernist denomination”. The president of the firm is said to have answered then: “You are dreaming in colours. If there is one thing Americans will never be interested in, it will be design made in Canada!” Boy, was he wrong!

The Ball-Sunar collaboration lasted until Sunar was closed in 1990 – it had been unable to manage accelerated growth after being bought by Hauserman. “The ‘after-race’ work—eight years of research!—remained inside portfolios.” Fortunately, Douglas Ball had other aces up his sleeve. Alongside his career with Sunar, he had been pursuing other avenues, such as designing furniture for the physically disabled.

In the 70’s and 80’s, Douglas Ball developed expertise in the field of wheelchair industrial design. 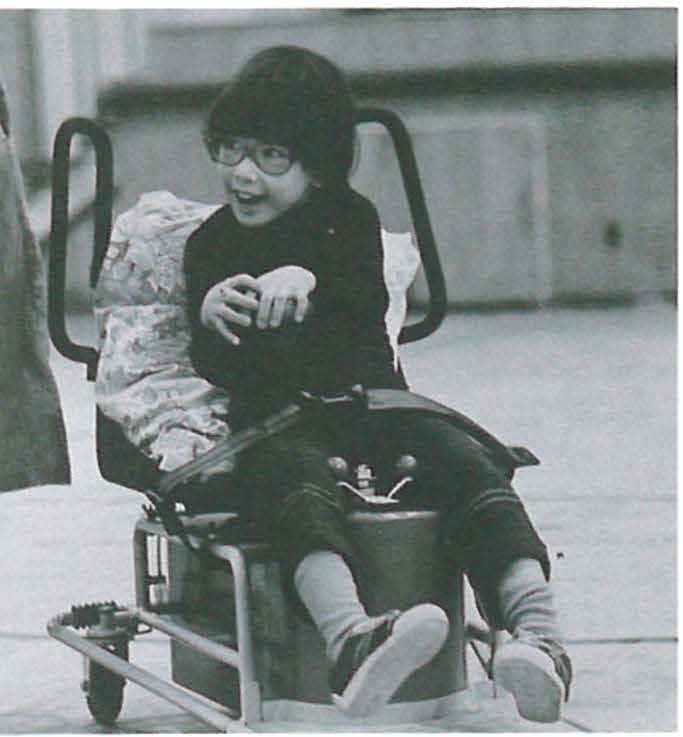 He created a prototype of a fun vehicule destined to children users. With its rear wheels free to turn at 360 degrees, the fun vehicule can be easily manipulated and offers a wide array of movements.

One can only regret that his innovative wheel chair for children did not meet with any daring manufacturer ready for the challenge. The high performance device, while not showing off its technicality, was designed to help psychomotor development through play. “The concept in a nutshell was that every child should envy the ones who would be able to use such a fun vehicle.” Before the arrival of computers changed his work method altogether, Douglas Ball would retire in his Japanese Room to provoke new ideas. As per partnering up with accomplices, Leon Goldik starting working in design as a model maker. Since 1965, he worked with Doug Ball and has grown to become his right arm over the years. The Clipper “capsule”, a self-contained computer workstation created in 1993 for New Spaces, was not met with the commercial success it deserved, but was a hit with connoisseurs. It is now showcased amongst the London Design Museum’s collection. In November 1986, Clipper appeared in Ripley’s Believe it or not comic strip, making new sorts of history lists! 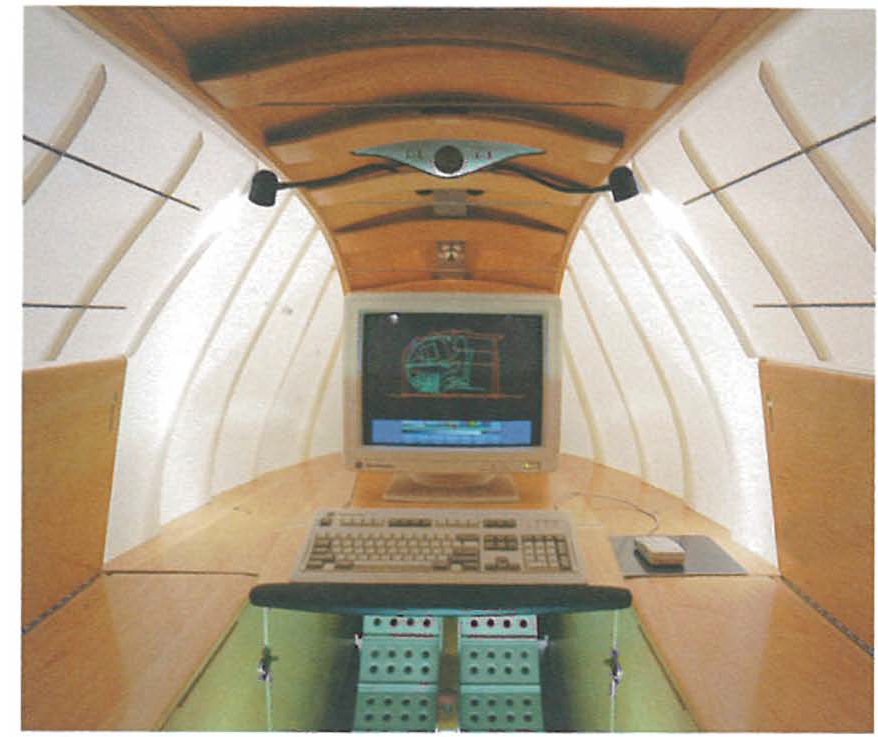 With Lucy, a chair produced by Vecta since 2000, Douglas Ball achieved a dream: “materializing years of research with a chair that will mark its time”. Thanks to its “ flexer back” that supports to all movements of the spine, such as an adult hand on the back of a baby, Lucy ensures optimal support for the user.

The micro-environment takes into account the needs of comfort, intimacy and conviviality of workers.

The workstation My Studio Environments, created for Herman Miller, is also about “evolutionary” design. It got the Best of Show Award and the Neocon 2006 Gold medal. 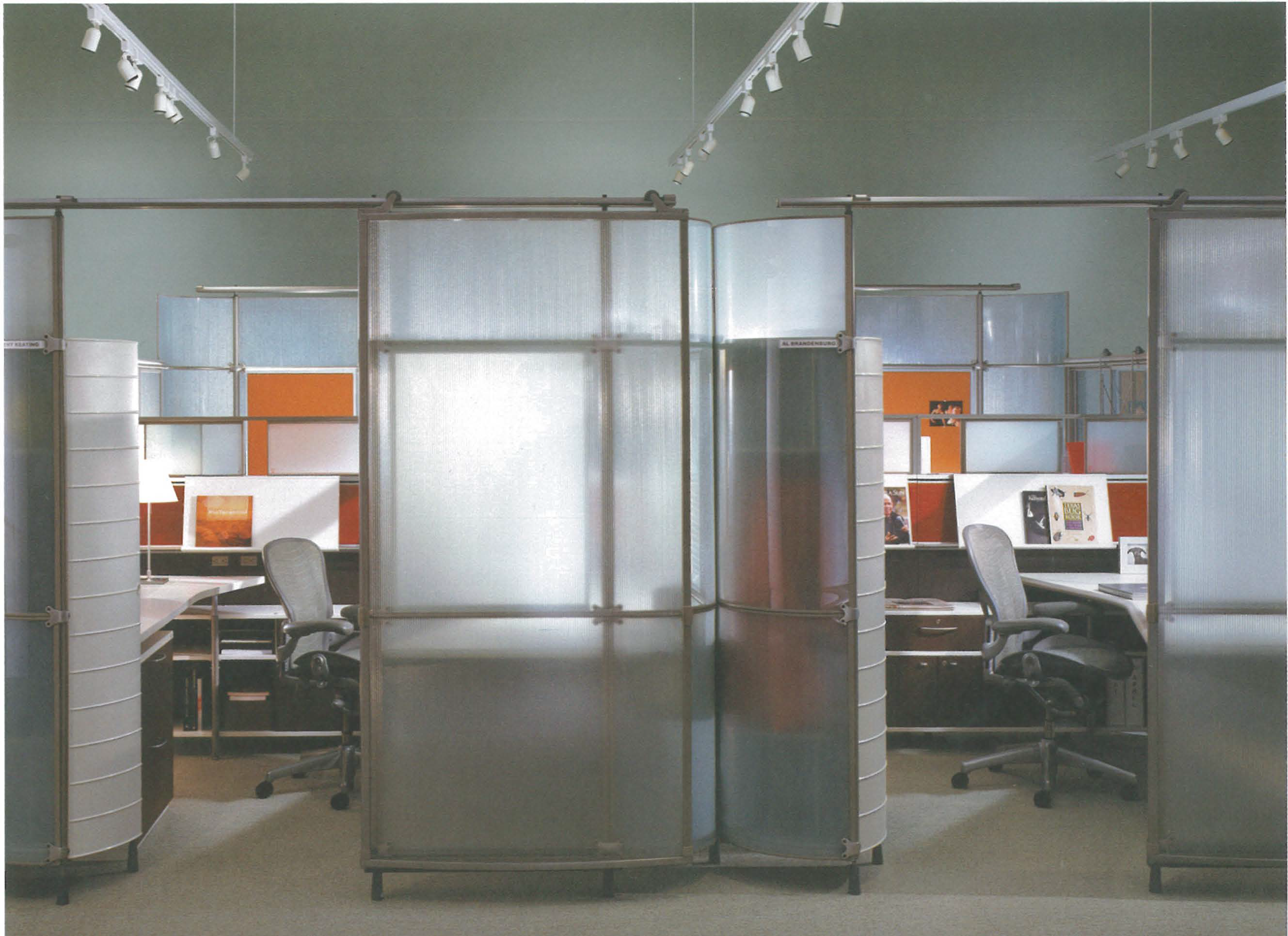 “The idea had been maturing for three decades, and the development took four years.” Long Road trips across the United States certainly helped. “The North-American obsession for the oversized cars, parking lots, shopping malls induced in me the need to think smaller.”

Also, life on board his good old Westphalia VW with every square centimetre neatly arranged, as well as inside his sailboat cabin, led him to enjoy restricted spaces where everything is at hand. Such spaces must be perfectly adjusted to their occupiers.

Certain elements incorporated in My Studio Environments, such as a shelf that runs across its structure, are borrowed from Ball’s redesigning the concept of a 1973 Westphalia.

My Studio Environments was thought out in this state of mind: it takes into account the needs of comfort, intimacy and conviviality of workers.

The Maestro has, time and time again, revolutionized the office world.